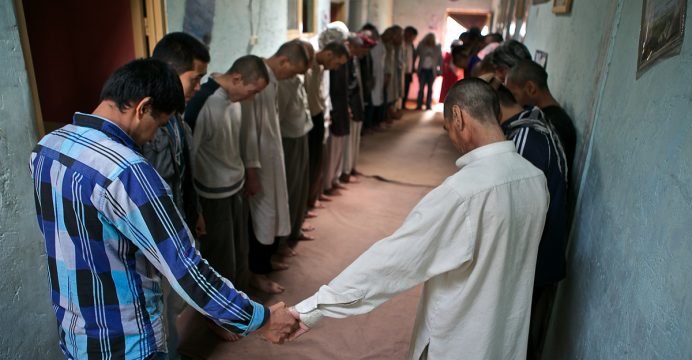 People with chronic opioid use disorders are more likely to relapse and do so sooner if they are treated in a compulsory drug detentioncentre rather than a voluntary drug treatment centre using methadone maintenance therapy, according to the first study comparing the outcome of both approaches published in The Lancet Global Health.

Approximately 600000 people are detained in compulsory drug detention centres without due process in East and South East Asia each year, despite reported human rights abuses and lack of evidence that they effectively treat addiction.

This study is the first to examine the risk of relapse from compulsory centres and concludes that they have no role in the treatment of opioid addiction. It strongly supports international calls for all countries to eliminate compulsory drug detention centres, and scale up evidence-based treatments such as methadone in voluntary community treatment settings.

In 2012, the United Nations called for the closure of compulsory drug detention centres, which do not have legal oversight and detain people for prolonged periods on the basis of suspected or actual drug use, without court process. They are similar to prisons in that they result in concentrated settings of people who use drugs and, due to their ineffectiveness, result in alarming rates of drug relapse and disruption to people’s social networks that accelerate their risk for negative consequences like overdose, death and infection with blood-borne viruses.

In 2010, Malaysia introduced voluntary ‘cure and care’ treatment centres providing methadone that began to replace many compulsory centres but government and public resistance to closure of compulsory detention remains high because of a zero-tolerance approach to drugs and a lack of recognition of the effectiveness of voluntary centres.

The study used a unique opportunity in Malaysia where both centres coexist. 89 people from compulsory centres and 95 from voluntary centres who met criteria for an opioid use disorder had drug tests and interviews on study entry and repeatedly after release (at one, three, six, nine or 12 months post-release).

People held in compulsory centres relapsed within 31 days compared with 352 days for half of those in voluntary centres – a 10 fold increase.

“Our findings strongly support international calls to eliminate compulsory drug detention centres by showing that they are ineffective in treating drug dependence, especially for those who use opioids,” said an author of the study, Professor Frederick Altice, Yale University School of Medicine, USA. “Countries using these measures should instead increase the availability of proven opioid-agonist therapies, such as methadone, and ensure there is adequate access to voluntary treatment programs in community settings and facilitate people with opioid addiction to seek treatment.”

Currently there are 22 compulsory centres housing 7000 people in Malaysia. People are detained for two years in the centres, which often don’t employ medical professionals, have no legal oversight and use unproven measures such as spiritual programmes, exercise, counselling and job-related training. After their release patients are supervised for 18 months.

At voluntary treatment centres, people instead voluntarily seek treatment and are medically assessed at the time of entry onto methadone then allowed to use a variety of treatments, including psychosocial counselling and recreational activities.

Although the study was not designed to differentiate between the exact types of services available in each centre, the authors note that the main difference in terms of treatment was provision or not of methadone, suggesting it is likely to have played an important role in the different rates of relapse. They also note that the study was observational and that those seeking treatment in a voluntary centre may be less prone to relapse than people detained by the police. However, they say that this was partly controlled for by only including enrolling people who met the criteria for opioid dependence.

Professor Adeeba Kamarulzaman, an author on the study from University of Malaya, Malaysia, said: “In recent years, compulsory drug detention centres in Malaysia and across Asia have come under scrutiny and question over their lack of effectiveness in treating addiction and their human rights transgressions. This study is the first to show the stark difference in the rate of relapse amongst people detained in these centres compared to those who received methadone – an evidence-based treatment. Not only does this study have major drug policy implications for Malaysia, but for much of Asia where compulsory drug detention centres and the number of people detained in them are expanding. ”