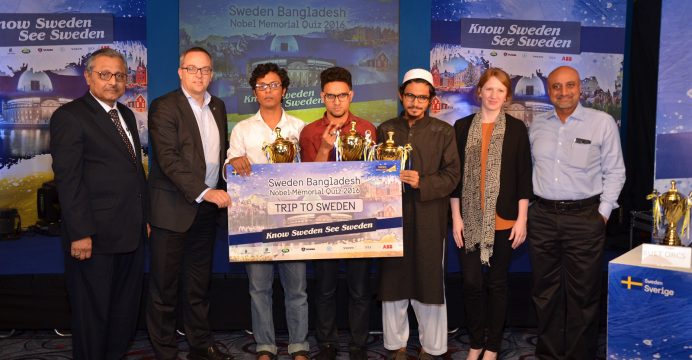 Dhaka University has won the Grand Finale of the Sweden-Bangladesh Nobel Memorial Quiz 2016 held today in Dhaka. Triumphing over three competing teams in the final, Team Pratishwik, comprising of Shamim Sohani Rimon, Wahik Kaiser, and Munzer Talukdar, have won a one-week fully paid the trip to Sweden and will receive the opportunity to visit famous Swedish companies and sight-seeing points in Sweden. The quiz focused on Alfred Nobel, the Nobel Prize, Nobel Laureates, and Sweden as a country.

The Sweden-Bangladesh Nobel Memorial Quiz 2016 highlights Sweden as a country of innovation and enterprise to the Bangladeshi people and features the work of Swedish companies in Bangladesh – especially among university students. Several globally renowned Swedish companies, including Arla, Ericsson, and Tetra Pak are operating directly in Bangladesh, while products of Swedish organizations like Volvo and Scania are widely popular in the country.

‘Bangladesh and Sweden are deepening their relations in the area of business, culture and research. The Nobel Quiz shows that there is a generation of students in Bangladesh with deep interest in enterprise and innovation, following the spirit of the great Swedish industrialist Alfred Nobel. I am also amazed to see the enormous interest and deep knowledge in Sweden that the participants show. They will help building our future cooperation.’ said the Swedish Ambassador.

This year, the competition was held in various stages. Activation took place in 30 public and private universities over the month of November. A total of 600 teams registered for the competition, 100 of which received invitation for participating in the main competition. Four teams eventually made to the Grand Finale, which was held today. The competition was first organized last year, where a team from Khulna University came out triumphant.