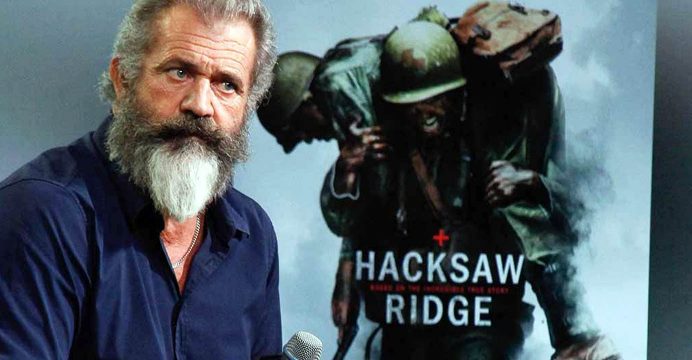 Mel Gibson and his new movie Hacksaw Ridge have swept the board at the Australian film awards in a return from the wilderness for the “choked up” Oscar-winner.

Gibson returned to his Australian roots to direct his first film in a decade, the true story of a conscientious objector who saved 75 men during the Battle of Okinawa in World War II.

It tells of Desmond Doss who enlists and is determined to save lives on the front line as a medic, but refuses to carry a gun on moral grounds.

Since its premiere at the Venice Film Festival, Hacksaw Ridge has generated Oscars buzz and was recognised by the Australian Academy of Cinema and Television Arts with nine gongs at their annual awards ceremony in Sydney late Wednesday.

They included best film and best director for Gibson, while the movie’s lead and supporting actors, Andrew Garfield and Hugo Weaving, also won.

“All the way up and down it’s a homegrown film,” said an emotional Gibson, who shot it in New South Wales state. “I’m really honoured and choked up I can’t even talk.”

He added: “Filming in Australia was fantastic, it was like the old days.”

Gibson’s family moved to Sydney from New York when he was 12.

He learned his trade at the National Institute of Dramatic Art in the city before making his name with Mad Max in 1979 and Gallipoli two years later, helping propel him into Hollywood.

Further success came with the Lethal Weapon series before Oscar success with Braveheart.

It made Gibson one of the most sought-after names in Hollywood, before being ostracised by Tinseltown after an anti-Semitic tirade captured on tape during a 2006 drunk-driving arrest.

The actor-director has since had to make do with a handful of parts in obscure or poorly received films.

Among other gongs, Crocodile Dundee star Paul Hogan was given one of the night’s highest honours — the Longford Lyell Award — for outstanding contribution to the Australian screen.
Previous winners have included Cate Blanchett, Geoffrey Rush, and director Peter Weir.