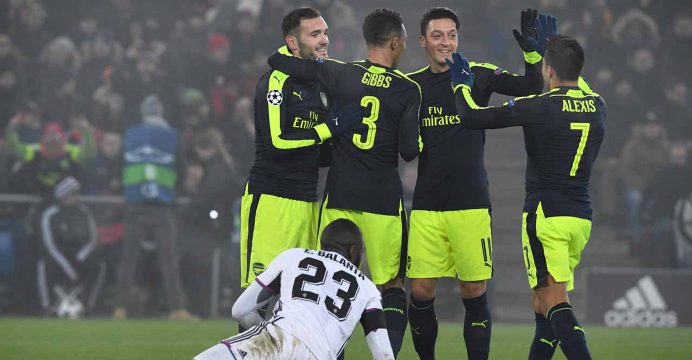 Lucas Perez made the most of a rare start by scoring a hat-trick in Tuesday’s 4-1 rout of Basel that sent Arsenal through to the Champions League last 16 as group winners.

The Spaniard missed over a month with an ankle injury following his move from Deportivo la Coruna in August but played a leading role in Switzerland as Arsene Wenger’s men stole first place from Paris Saint-Germain in Group A.

The French champions were held to a 2-2 draw at home to Bulgaria’s
Ludogorets, allowing Arsenal to wrest back top spot and avoid the likes of Barcelona and Atletico Madrid in the next round.

“We made a great result to be top of this group which is what we wanted,”Wenger told BT Sport.

Perez tapped home from close range following a Kieran Gibbs cross in the eighth minute and the 28-year-old soon added to his tally when the left-back’s low drive was tipped into his path by Basel goalkeeper Tomas Vaclik.

The striker had netted just twice in a 4-0 EFL Cup victory over
Nottingham Forest since his arrival at Arsenal in a deal worth 17 million pounds ($22.3 million, 20 million euros).

But he capped a memorable first Champions League start with his third goal of the evening just two minutes after half-time when he slotted Alexis Sanchez’s pass low into the far corner.

Substitute Seydou Doumbia gave the St. Jakob-Park faithful something to cheer with a consolation effort 12 minutes from time but defeat ended Basel’s European adventure. “We did the job I think in a convincing way, we were mobile, we started very well, we scored goals on all our accelerations and overall we had a convincing performance,” said Wenger.

The Gunners will find out their opponent for the last 16 when the draw is made at UEFA headquarters in Nyon on Monday.

“It is difficult to know but you feel a bit less guilty if you have a bad draw (after finishing) first rather than second – we have done our job and let’s see what happens,” he added.