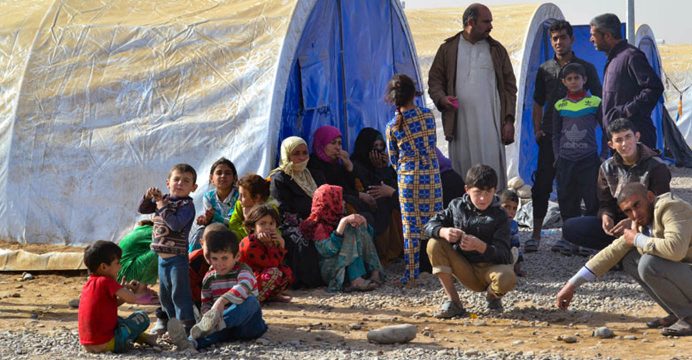 Winter rains and plunging temperatures have hit northern Iraq in the past two days, posing additional challenges for internally displaced persons (IDPs) and communities affected by military operations around Mosul.

Current displacement from Mosul operations stands at 77,826 people since 17 October; over 42,000 IDPs are from the sub-district of Markaz Mosul, where Mosul City is located. From 29 November to 2 December, there has been an increase of more than 3,900 displaced individuals identified.

“We’re so cold at night. We have only the clothes we fled in, so we don’t have any protection from the cold. We left our homes 33 days ago – it was a little warmer then. But now the kids are sick because of the weather – I have eight children and they are all unwell,” said Layla, who is currently living in an IDP camp in northern Iraq. IOM continues to provide both health care and non-food relief items (NFIs), including mattresses, blankets and heaters to displaced people inside and outside camps to help families better cope with exposure to the winter weather.

This week IOM distributed over 2,300 winterized NFI kits in Ninewa and Erbil governorates to displaced Iraqis and to those returning to their homes. The distributions were funded by the United States, the United Kingdom and the European Union.

“We are deeply concerned about both the displaced and host communities’ ability to cope with the winter weather. Now that the rains have begun, people living in makeshift shelters or unfinished buildings are at risk from the cold, damp weather, which is affecting their health and wellbeing, particularly the elderly and children. Our top priority right now is to get as many people as possible secure warm shelter, blankets and heaters,” said IOM Iraq Chief of Mission Thomas Lothar Weiss.