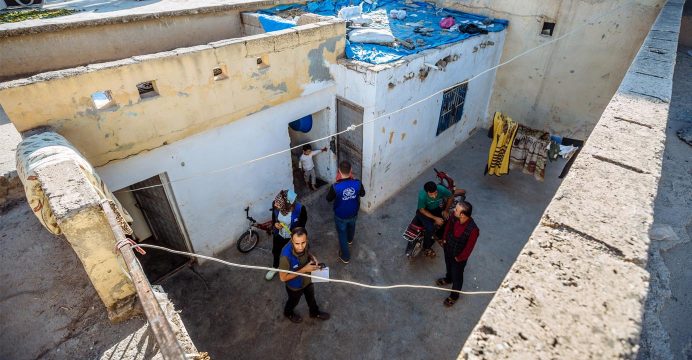 IOM Turkey is on course to rehabilitate the accommodation of 250 Syrian families by 31 December 2016, under a pilot scheme in Sanliurfa province. The project, funded by the Norwegian government began in October and will conclude at the end of the year.

The project targets the most vulnerable families by conducting minor repair works on their homes to protect them from the elements and make life a little easier over the winter.

Sanliurfa, a province in southeast Turkey bordering Syria, hosts some 400,000 Syrians – almost 21 percent of the population.

As of yesterday (1/12), 67 shelters had already been rehabilitated, housing 346 people. An additional 33 shelters, housing 170 people, are currently under repair and are expected to be completed in the coming days.

The work, which is done by a contractor vetted by IOM, includes repairs to roofs, windows, doors and water and sanitation facilities. Families selected for this type of assistance are those living in accommodation most in need of rehabilitation.

While Syrian refugees receive a wide range of services and protection from the Turkish government, some still live in poor housing.

“By undertaking repair works, IOM improves their living standards and indirectly supports homeowners who have allowed their property to be occupied either rent-free or at a low rent. In order to ensure protection from eviction, IOM works closely with the local muhtars (neighbourhood leaders) and homeowners renting out the properties to ensure year-long leases are signed,” said IOM Turkey Refugee Programme Coordinator Filiz Demir.

Demir added that if more funding was made available, the project could be extended beyond 31 December.

Throughout the country, IOM is working closely with the government to assist tens of thousands of families with various forms of support, including basic needs (cash assistance through e-vouchers, food assistance and winterization), education, livelihoods, case management, community centre support, health care and community stabilization.

With the onset of winter and linked to the shelter rehabilitation project, IOM is also currently carrying out winterization assistance for about 15,000 Syrian families (approximately 85,000 individuals) across the southeast Turkey in Sanliurfa, Hatay, Adiyaman and Gaziantep provinces.

“Families are supported with restricted cash assistance through e-vouchers that allow them to purchase fuel, coal, wood, stoves, heaters, blankets and other winterization items in shops contracted by IOM. Those living in hard-to reach rural areas are supported with in-kind support in the form of coal, stoves and other non-food relief items,” said Demir.

As of 24 November 2016, according to data from the Directorate General for Migration Management, Turkey is hosting 2.78 million Syrian refugees spread across the 81 provinces of the country.