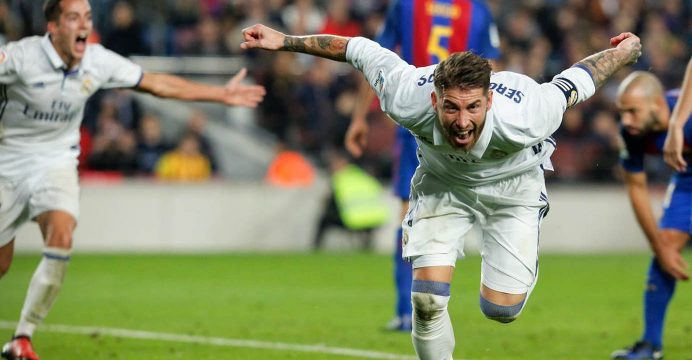 Real’s title hopes lifted by draw which “felt like victory”

Real Madrid celebrated their 1-1 draw at Barcelona on Saturday as if they had snatched victory and the two teams’ contrasting moods at fulltime suggested the result could have huge ramifications for the title race.

Real marked the result just as they had their away league victory over the Catalans last season, by capturing the jubilant atmosphere in the dressing room with a team photo which captain Ramos posted on social media.

“Scoring a goal like that in the Nou Camp almost feels like a victory,” said midfielder Luka Modric, who had delivered the free kick from which Ramos scored.

“We feel invincible, with so much quality and so many world class players, if we play as a team and leave everything on the pitch and fight and deliver, it’s very difficult to beat us.”

A point was of little use to Barca, who had drawn their previous two league games, and captain Andres Iniesta did not hide his frustration.

“I’m left with a bad sensation, we were so close to scoring a second goal and they get one with practically their first chance. That’s why it hurts,” he said.

The draw, however, was hugely significant for Real and left them in the driving seat to secure a first title since 2012.

It also moved them to within one game of equalling a club record of 34 matches without defeat in all competitions.

“The draw is very important for us above all because playing here is so complicated, and the fact we keep picking points up will be vital come the end of the season,” said Real midfielder Casemiro.

Ramos exercised caution, warning his team mates “to not get carried away”.

Real will not need reminding that they led Barca by four points at this stage of the campaign two years ago and ended up losing the title.

They endured a mid-season slump shortly after returning from the Club World Cup, and the European champions will be intent on not letting history repeat itself.

Real have one more league game in 2016, against Deportivo La Coruna, before flying to Japan for this year’s tournament.

Barca defender Gerard Pique recalled that famous turnaround, which ended with his side winning the treble.

“It’s similar to what happened in Luis Enrique’s first year, we were four points behind then so we have to be calm,” he said.

“There’s a long way to go in the season, and we’ve been in worse situations.”