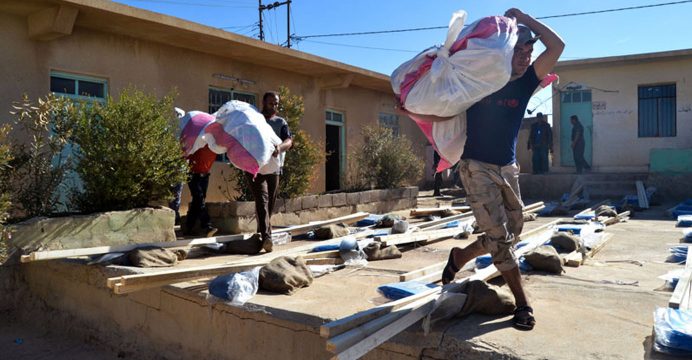 Over one month into Mosul military operations, which began on 17 October, nearly 73,000 Iraqis are currently displaced from Mosul and adjacent districts (as of 24 November), according to IOM’s Displacement Tracking Matrix (DTM) Emergency Tracking.

Meanwhile, as humanitarian operations focus on Mosul, thousands of displaced families are returning home to other cities previously occupied by ISIL, like Ramadi in Anbar governorate. An IOM team visited Ramadi on 23 November to meet with local leaders and community members and assess their priority needs as they try to rebuild their lives.

Geographically, Anbar is Iraq’s largest governorate and its cities of Ramadi and Falluja were key targets for ISIL when it attempted to consolidate its hold on Iraqi territory. Between April and July 2016, Iraqi security forces took back the two areas, but the fighting resulted in substantial damage to private property and public infrastructure, together with mass displacement.

Now that the area is back under the control of the Iraqi government, people have been returning to their homes. Currently, 67,791 families (approximately 406,746 individuals) have returned to Anbar, accounting for 35 percent of total returns in Iraq and making it the governorate experiencing the highest number of returns in the country.

While IOM is currently undertaking an array of life-saving humanitarian activities such as the distribution of non-food items, emergency shelter options such as sealing off-kits, provision of primary health care through mobile clinics, camp coordination/camp management activities in informal settlements, income generation opportunities and light infrastructure rehabilitation and community policing, there is still much to be done, given the extent of the destruction.

An elderly woman who returned to her home in Ramadi told IOM her story. “I had to leave my home and go to Erbil in 2014 after ISIL came to Ramadi. We came back this summer to nothing. Our house was completely destroyed. Not only was the trip back from Erbil very difficult, but we had no choice but to rent a two-bedroom house. Imagine, there are 17 of us in a two-room house that has no windows, no electricity and a roof that may collapse at any minute. We pay USD 350 a month to live there, but we really don’t have another choice because my husband and sons can’t find any work.”

“It is critical that we continue to give attention to areas like Ramadi, which is recovering from a long period under ISIL control. Transitioning from emergency relief, which is still critical, to longer term livelihoods and resiliency initiatives will be a key focus for IOM in the coming months,” said IOM Iraq Chief of Mission Thomas Weiss, after meeting with city and governorate officials in Ramadi.