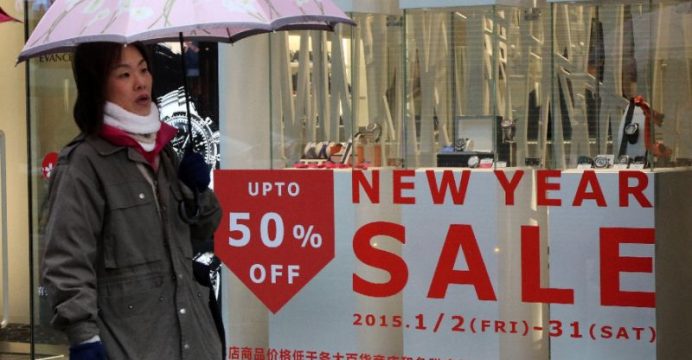 The BoJ’s target is a key part of Prime Minister Shinzo Abe’s faltering bid to pump up the world’s number three economy.

The country has been struggling to reverse a deflationary spiral of falling prices and lacklustre growth but October’s data mark eight straight months of declines — the longest streak since 2011.

Bank of Japan (BoJ) governor Haruhiko Kuroda has pointed a finger at weak crude prices as the chief culprit behind the weakness.

The programme sharply weakened the yen — fattening corporate profits — and set off a stock market rally that spurred hopes for the once-soaring economy.

But growth remains fragile while inflation is far below the BoJ’s target. Earlier this month, the central bank said it expected to hit two percent inflation by March 2019 — four years later than its original target and the latest in a string of delays.

“What was supposed to be a quick two-year victory has transformed into a prolonged war of attrition that is set to drag on,” Yasunari Ueno, chief market economist at Mizuho Securities, said in a commentary before Friday’s data were published.

“I’d say prices will turn into positive territory eventually, but so far upward movement of prices… is still weak,” he said.

“The reason behind the slow pace of price rises is because the economic recovery is very slow.” The BoJ hoped that consumers would spend more if prices were rising, persuading firms to expand operations and getting the economy humming.

But wage growth has fallen below expectations, meaning workers have less money to spend. Abe’s promises to cut through red tape — the key third plank of Abenomics — have also been slow in coming.