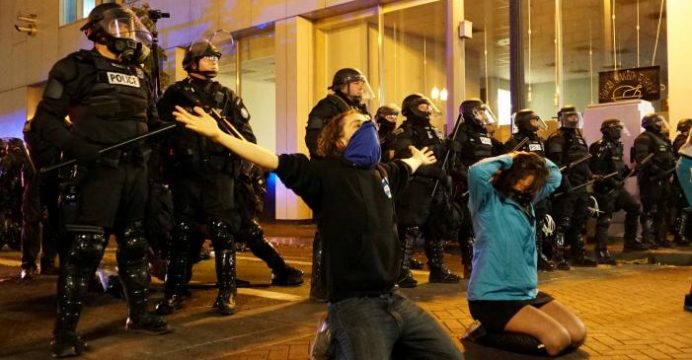 Thousands of protesters took their frustrations over Donald Trump’s election as the next U.S. president onto the streets on Friday and into Saturday in several cities, including Portland, Oregon, where one protester was shot.

The unidentified man was wounded on Portland’s Morrison Bridge at 12:45 a.m. local time as he and dozens of other protesters crossed it during their demonstration, one of several across the country denouncing Trump’s campaign rhetoric about immigrants, Muslims, and women, reports Reuters.

In the Portland incident, police said in a statement that a man got out of a vehicle on the bridge where he confronted and then shot a protester, who was taken to hospital with non-life threatening injuries. The suspect is still at large, police added. 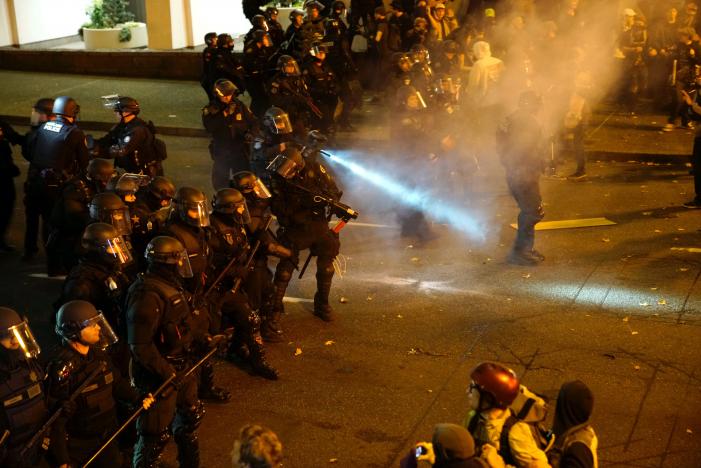 A police officer sprays the crowd with an irritant during a protest against the election of Republican Donald Trump as President of the United States in Portland, Oregon, U.S.

Earlier in the night, protesters blocked traffic and threw objects at Portland police dressed in riot gear who responded with pepper spray and flash-bang devices. At one point, police pushed protesters back and appeared to take at least one person into custody, according to footage on a local NBC affiliate.

Hundreds of protesters also marched through the streets of Los Angeles, blocking traffic as they waved signs in opposition of Trump and chanted “We reject the president elect” and “Whose streets? Our Streets”.

Several thousand activists marched through downtown Miami, with a few hundred making their way onto a highway, halting traffic in both directions.

In New York, demonstrators again gathered in Washington Square Park and by Trump Tower, where the Republican president-elect lives, on Fifth Avenue.

Trump, who initially denounced Americans who protested against his election, saying they had been “incited” by the media, reversed course and praised them on Friday.

“Love the fact that the small groups of protesters last night have passion for our great country. We will all come together and be proud!” Trump said on Twitter.

The tweets were further evidence of Trump’s mixed messages since he announced his candidacy 17 months ago. After Democrat Hillary Clinton conceded defeat early on Wednesday, he took a far more conciliatory tone than he had often displayed during his campaign and promised to be a president for all Americans.

Anti-Trump demonstrators have voiced concerns that his presidency, due to start on Jan. 20, would infringe on Americans’ civil and human rights.

They cited his campaign promises to restrict immigration and register Muslims, as well as allegations the former reality-TV star sexually abused women.

Protesters in various cities have chanted slogans, including “No hate! No fear! Immigrants are welcome here!” and carried signs reading “Impeach Trump”.

White supremacist groups including the Ku Klux Klan (KKK) have praised Trump’s election, and some civil rights advocacy groups have reported a spike of attacks on minorities following Trump’s victory on Tuesday. Trump has rejected the KKK’s support.

Most of the protests across the country, which have also taken place in Washington, D.C., have been largely comprised of young adults and college students.

With the country evenly divided, many voters were shocked by the result given that opinion polls failed to predict Trump’s triumph. The Republican Party also managed to maintain its majorities in both houses of Congress in Tuesday’s vote.

More anti-Trump demonstrations were planned for the weekend, including in New York and Los Angeles. A group calling itself “#NotMyPresident” has scheduled an anti-Trump rally for Washington on Jan. 20, Inauguration Day, when the New York real-estate developer formally succeeds President Barack Obama.

Republican National Committee Chairman Reince Priebus acknowledged on Friday the tight race with Clinton, but said anti-Trump protesters have to accept the election results. He pointed to Trump’s call for unity and meetings on Thursday with Obama and Republican leaders as reasons for reassurance.

Security barricades now shield some of Trump’s most visible properties, including the newly opened Trump International Hotel near the White House and Trump Tower in New York.

Trump’s base of support in the election was the broad middle of the country, with voters in states that had long supported Democrats shifting to him after he promised to renegotiate trade deals with other countries.