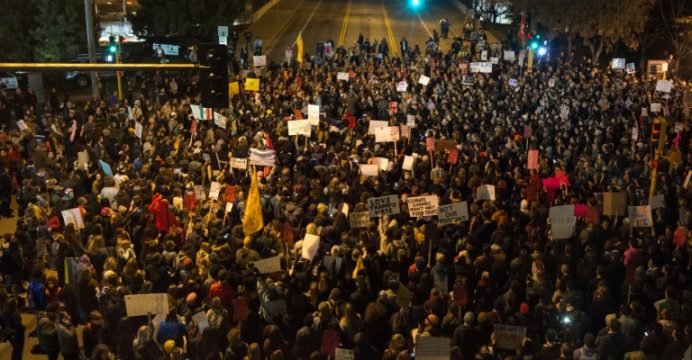 Thousands of protesters angry over Donald Trump’s election win took to the streets for a second straight night, with at least one demonstration degenerating into a riot against the tycoon turned president-elect.

Accusing Trump of racism, sexism and xenophobia, protesters from New York to Los Angeles blocked traffic and chanted slogans like “Not my president” and “We reject the president-elect.”

The worst violence was in the northwestern city of Portland, where protesters hurled projectiles at officers, vandalized businesses, smashed car windows and attacked drivers, reports BSS. 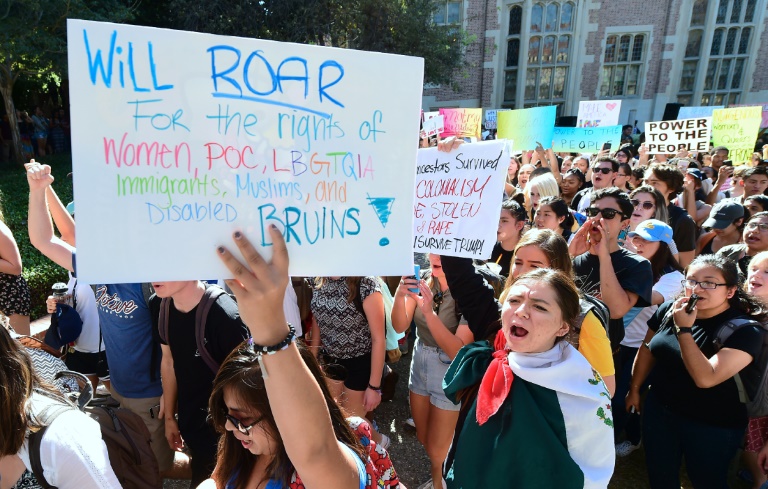 Police said they were treating the protests as a “riot” due to what they said was “extensive criminal and dangerous behavior.”

In his first comments on the unrest, Trump blamed the media.

The violence stood in contrast to an apparently harmonious meeting between Trump and President Barack Obama designed to heal divisions after the most acrimonious election campaign in recent memory.

Obama and Trump put past animosity aside during the 90-minute White House meeting designed to quell fears about the health of the world’s pre-eminent democracy, and vowed to carry out a smooth transfer of power.

After a nasty campaign that culminated in the election of a 70-year-old billionaire and former reality TV star who has never held public office and who gained power on a populist platform, the message was: this is business as usual in a democracy.

The outgoing Democratic president and his successor huddled one-on-one in the Oval Office, for what Obama characterized as an “excellent conversation” and then put on a remarkably civil joint public appearance.

“It is important for all of us, regardless of party and regardless of political preferences, to now come together, work together, to deal with the many challenges that we face,” Obama said.

Trump appeared more subdued than usual, and was unusually cautious and deferential in his remarks.

“Mr President, it was a great honor being with you,” Trump said, calling Obama a “very good man.”

The meeting, which came less than 36 hours after Trump’s shock election victory over Democrat Hillary Clinton, had the potential to be awkward.

After all, Trump championed the so-called “birther movement” challenging that Obama was actually born in the United States — a suggestion laden with deep racial overtones — only dropping the position recently.

And if the president-elect fulfils his campaign promises, he will unravel almost all of Obama’s signature achievements.

Trump — who previously called Obama the “most ignorant president in our history” — said he looked forward to receiving the president’s counsel.

Obama — who has cast Trump as a whiner and “uniquely unqualified” to be commander-in-chief — vowed his support.

He told Trump his administration would “do everything we can to help you succeed, because if you succeed, then the country succeeds.”

The two men ended the improbable and historic White House encounter with a handshake and refused to take questions, appearing to find common cause in their opinion of the press.

White House officials said Obama and Trump discussed a range of issues including global hotspots and the president’s meetings next week with leaders from Germany, Greece and across the Asia-Pacific.

On that trip, Obama is likely to be inundated with panicked questions about America’s role in world affairs. The White House hopes that by rolling out the red carpet for Trump, they can bind him to some of the conventions of the office.

Trump then traveled to Capitol Hill to meet Republican leaders who had been at best cool to him winning their party’s nomination. The president-elect proclaimed health care, border security and jobs as his top three priorities in the White House.

“We had a very detailed meeting,” Trump told reporters. “As you know, health care — we’re going to make it affordable. We are going to do a real job on health care,” he said.

Trump made repealing Obamacare and building a border wall between the United States and Mexico, pillars of his presidential campaign.

During a bitter campaign that tugged at America’s democratic fabric, the tycoon also pledged to deport illegal immigrants, ban Muslims from the country and tear up free-trade deals.

Trump said he and the Republican majority in Congress were going to accomplish “absolutely spectacular things for the American people,” adding he was eager to get started.