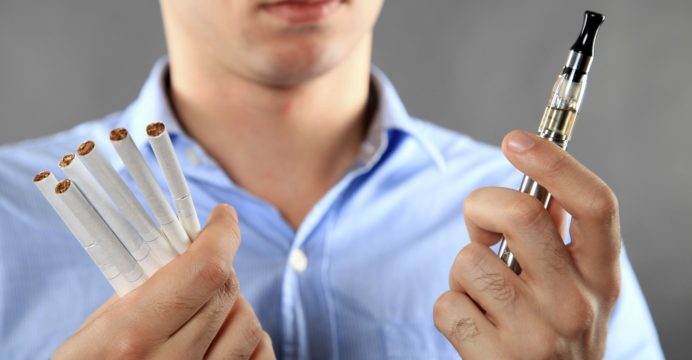 The campaign will air on all major national TV channels in Bangladesh for a period of five (5) weeks from yesterday. This new campaign aims to encourage smokers to quit and discourage youth from starting to use tobacco, by showing the real health harms of tobacco use. The 30-second public service announcement (PSA) features Mr. Hafizul Mina, a tobacco user for 35 years, who developed life-changing, tobacco-related lung cancer. Mr. Mina is shown interacting with his cancer doctors and talking about how tobacco has impacted his health, including needing surgery for lung cancer. From his hospital bed, he holds up a cigarette pack with a warning image of lung cancer, with the strong message: “Smoking causes lung cancer. It’s on the packs. See it… Believe it!”  Billboards featuring the Mr. Mina – including graphic scenes of his operation and cancerous tumor – also will be displayed in community settings around the country.

The State Minister for Health and Family Welfare, Mr. Zahid Maleque, MP stated: “We are committed to reducing tobacco-related ill health and premature death for the benefit of our people and our economy, which is also compatible with our commitments under the 2030 Agenda for Sustainable Development. Tobacco-related disease doesn’t just harm the tobacco user; it can deprive families of their breadwinners, leaving them destitute with children not able to complete their education, and causing immense suffering. That’s why we need as many Bangladeshis as possible to see the harsh reality of what happens when you consume tobacco. We urge TV stations not to shy away from airing this hard-hitting campaign; it serves an essential purpose in helping to save the lives and reduce the suffering of our fellow citizens. We urge people to heed this powerful campaign and stop smoking.”

Professor Sohel Reza Choudhury, from the National Heart Foundation Hospital & Research Institute, declared: “Unfortunately, Mr. Hafizul Mina is only one in a long line of patients that present at our hospitals daily with serious conditions caused by tobacco. What is most frustrating to doctors is that these conditions are entirely preventable, but instead cause considerable personal harm and distress to the individual and their family, as well as social and financial costs. Of most concern is the fact that more than 41.3 million Bangladeshis use smoked and smokeless forms of tobacco, with the number of tobacco users growing. Worryingly, a significant number of Bangladeshi youth are taking up tobacco use, with over 9 percent of boys and 2.8 percent of girls aged 13 through 15 consuming some tobacco product. The volume of tobacco-related disease already is a significant burden on our health system; urgent action is needed to prevent this from escalating further.”

Mr. Shafiqul Islam, Country Advisor at Vital Strategies stated: “We are pleased to support the Ministry of Health and Family Welfare in implementing the third national tobacco control communication campaign this year. These impactful campaigns, combined with other sensible policy initiatives including pack warnings and increases in tobacco pricing, will have a major impact on reducing future tobacco use. We thank Mr. Hafizul Mina for his bravery in sharing his story, in the hope that a new generation will not get addicted to tobacco and share his experience of suffering from life-limiting, tobacco-related disease.”

According to The Tobacco Atlas, tobacco is the cause of 14.6 percent of adult male deaths and 5.7 percent of adult female deaths in Bangladesh – more than the average in other low-income countries. Tobacco-related disease – including stroke – kills almost 100,000 Bangladeshis every year, while another 382,000 suffer from chronic illnesses caused by tobacco.

The 30 second PSA is part of a series of tobacco victim testimonials which featured in a national campaign called “People behind the packs”, first broadcast in March 2016, which supported the implementation of graphic pictorial warnings on all tobacco packs in Bangladesh. Focus groups of tobacco users in Bangladesh have identified that the most graphic images of real tobacco-related harm are most likely to motivate them to think about their tobacco use and make a quit attempt. Research indicates that almost 70 percent of tobacco users recalled this powerful campaign. More than 51 percent of those who recalled the campaign reported making an attempt to quit smoking and 42 percent of smokeless tobacco users also made a quit attempt. Despite the considerable evidence of the effectiveness of graphic warnings, a number of television stations still refuse to run such PSAs on TV and even fog out the pack warnings, which are visible in kiosks around the country, during news broadcasts.

Research has shown that mass media campaigns and large graphic pack warnings are among the most effective means to encourage people to stop using tobacco. Hard-hitting campaigns and images can compel tobacco users to quit, increase knowledge of the health risks of tobacco use, and promote behavior change in both smokers and non-smokers. They are featured in the World Health Organization’s M-P-O-W-E-R (W=Warn) strategies to reduce tobacco consumption. MPOWER strategies are endorsed and promoted by the Bloomberg Initiative to Reduce Tobacco Use, of which Vital Strategies is a principal partner.