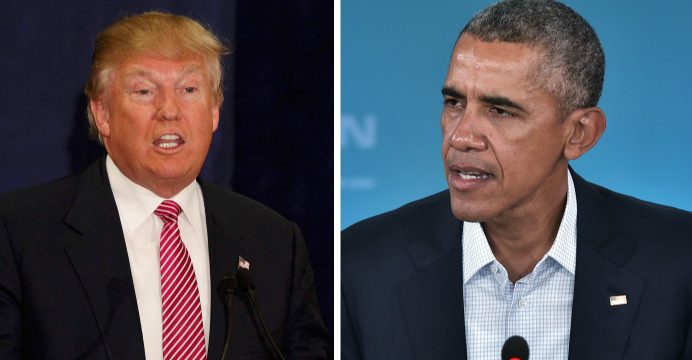 President Barack Obama will host Donald Trump in the Oval Office on Thursday, hoping to ease a smooth transition of power and steady nerves after an election that has shocked the world.

Forty-eight hours after Trump’s improbable political victory, the 70-year-old president-elect will get a chance to measure the drapes ahead of his January inauguration. It could be a deeply uneasy meeting for two men who have sparred repeatedly, reports BSS.

Trump has questioned whether Obama was born in the United States — a suggestion laden with deep racial overtones — and the Democratic commander-in-chief has described the celebrity businessman as “uniquely unqualified” to be president. 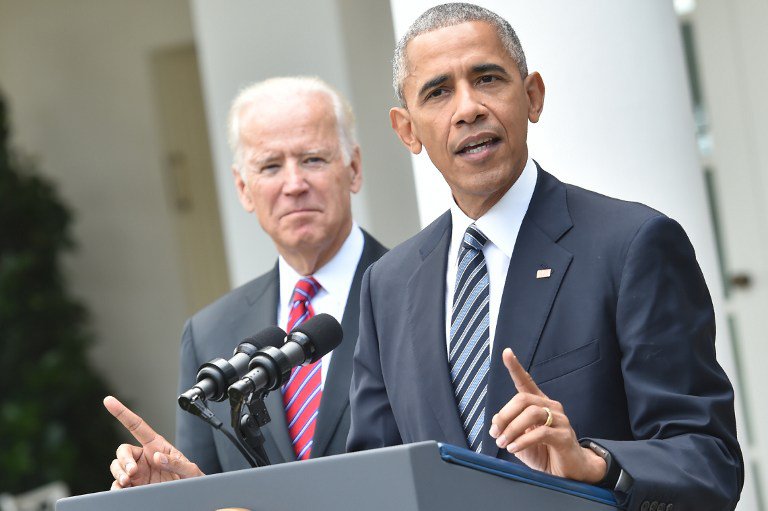 US President Barack Obama (R) together with Vice President Joe Biden (L) addresses, for the first time publicly, the shock election of Donald Trump as his successor, on November 9, 2016

But the last day has seen efforts to bring this deeply divided country together after a brutal two-year battle for the White House that at times appeared more tribal than partisan.

Vanquished Democratic rival Hillary Clinton fought back the bitter disappointment of not becoming America’s first female president to urge Americans to give Trump a chance, at least from the outset.

“We owe him an open mind and the chance to lead,” she said in a concession speech.

Obama, addressing disconsolate staff in the White House Rose Garden, played down the extraordinary Trump upset, painting it as democracy being its messy self.

“Sometimes you lose an argument,” he said, adding that all Americans would now be “rooting” for Trump’s success.

“We are Americans first. We’re patriots first. We all want what’s best for this country,” Obama said as staff wiped away tears and pondered whether his administration’s eight years of toil had come to naught.

In the battle for the soul of America, those who helped elect America’s first black president now appear to be in retreat.

Both Obama and Clinton issued a faint but definite warning that Trump must respect institutions and the rule of law if a modicum of goodwill is to hold.

In remarks that would once have seemed unthinkable, the president of the world’s foremost democracy and military power subtly urged his successor to respect the 240-year-old system of governance and its institutions.

White House spokesman Josh Earnest demurred when asked whether Trump would respect the rule of law. His tone “would seem to suggest that certain basic principles of our democracy are likely to be upheld.”

“Likely” is unlikely clear enough for Washington’s partners who see the entire global political order, which hinges on Washington’s moral and military leadership, as cast into doubt.

German Chancellor Angela Merkel appeared to take on the mantle of champion of liberal values and “leader of the free world,” an epithet usually reserved for American presidents.

She warned that “close cooperation” between the two countries must be based on shared democratic values, and reminded Trump of the global responsibility he carries.

“On the basis of these values, I offer close cooperation to the future president of the United States of America, Donald Trump.”

The leaders of America’s closest hemispheric partners, Canada and Mexico, quickly made clear their willingness to work with the new president, offering a message of continuity and stability with their giant neighbor. Mexico’s President Enrique Pena Nieto reached out to the president-elect, agreeing to a fresh meeting.

The Republican Party leadership, too, embraced their newfound champion. House Speaker Paul Ryan, who had distanced himself from Trump in the final month of the campaign, pledged to “hit the ground running” and work with him on conservative legislation.
But Ryan also called for healing, saying the bitterly contested race must be followed by a period “of redemption, not a time of recrimination.”

Likewise, Trump called for national reconciliation after Clinton conceded defeat in a result that virtually no poll had dreamed of predicting.

He told a crowd of jubilant supporters early on Wednesday in New York “it is time for America to bind the wounds of division” as he pledged to work with Democrats in office.

On Wednesday Trump huddled at Trump Tower in New York with a group of advisers, planning the transition to running the world’s largest economy when he takes office on January 20.

During a bitter campaign that tugged at America’s democratic fabric, the tycoon pledged to deport illegal immigrants, ban Muslims from the country and tear up free-trade deals.

Trump’s campaign message was embraced by a large section of America’s white majority, grown increasingly disgruntled by the scope of social and economic change under Obama.

Some of the most enthusiastic support for Trump came from far-right and nationalist politicians in Europe such as French opposition figure Marine Le Pen, Matteo Salvini of Italy’s Northern League and British euroskeptic Nigel Farage.

Russia’s autocratic leader Vladimir Putin said he wanted to rebuild “full-fledged relations” with the United States, as he warmly congratulated the president-elect.