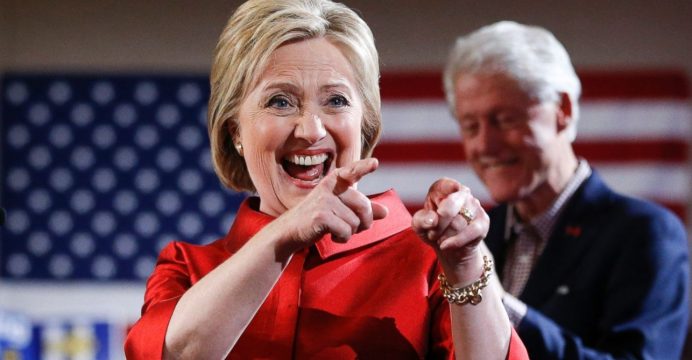 According to Clinton, now the Democratic nominee for US presidency, the agency’s response was effectively “thank you but we don’t take girls”.

In 1961, a 14-year-old Hillary Rodham Clinton wrote a letter to NASA asking what she needed to do to become an astronaut.

The organisation has since changed its policies and become more inclusive, sending dozens of women into space, but the number of female US presidents since the letter was purportedly sent remains the same; zero.

Clinton’s journey to change that began on the opposite side of the US political divide, as a young conservative activist for the Republican Party.

By 1968 however, she had transformed.

The young Clinton broke with the party after the assassination of civil rights leader Martin Luther King and labeled the Republican establishment racist.

Later, Clinton studied law at Yale University, where she met her husband and future US President Bill Clinton.

The two were devoted Democrat activists and campaigned together for the party, eventually marrying in 1975.

Her first political positions came with the marriage; first as the First Lady of Arkansas when her husband was elected the governor of the state in 1978.

Later Clinton would serve as First Lady in the White House, when Bill was elected president of the US in 1992.

Her first direct political appointment came with her election to the US senate in 2000.

In office, her foreign policy positions were barely distinguishable from the Republican President George W Bush; Clinton supported the invasions of Iraq and Afghanistan and advocated for strong support of Israel.

At home, Clinton supported the controversial Patriot Act and the bailout of Wall Street banks during the 2007 to 2008 financial crisis.

The latter period would also mark the start of her first campaign for the presidency, but after an initial lead, the attempt was cut short at the primary stage when current US President Barack Obama secured the Democratic nomination.

However, it would be Obama who gave Clinton her most senior political role; as Secretary of State, a position in which she presided over the US response to the Arab uprisings that started in 2010.

During her tenure as the top US diplomat, Clinton oversaw Western-led military action in Libya to topple the regime of Colonel Muammar Gaddafi, the Wikileaks exposes, and the operation that killed the leader of al-Qaeda, Osama Bin Laden.

Clinton was also in the position during the attack on the US consulate in the Libyan city of Benghazi, which killed US ambassador Christopher Stevens and three other Americans.

For years the incident became the primary attack point for her critics, who accused Clinton of failing to heed warnings and to do enough to protect those who died.

The Democratic nominee stood down as secretary of state in 2013 but the scandals were brought back out into the spotlight again after it was revealed she had used private email servers for official correspondence.

The FBI cleared Clinton of wrongdoing, but her Republican rivals have used the scandal as evidence of her alleged incompetence.

Most recently, in October 2016, Clinton’s campaign manager John Podesta’s private emails were hacked and leaked, allegedly by members of the Russian intelligence.

The leaks raised questions about the payments received by the Clinton Foundation, which the Democrat leader runs with her husband, and the pair’s ties to Wall Street banks.

Analysts say in any other campaign and against any other candidate, the leaks could have destroyed a candidacy, but Clinton is still favourited to become the next president.

Expecting opponents to forget about the numerous scandals is another issue entirely, and one that could prove to be a nuisance for a Clinton presidency, especially if the Republicans maintain control of the Congress.