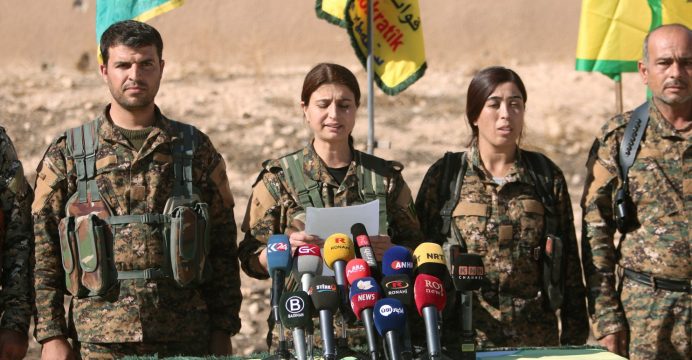 A U.S.-backed alliance of Syrian armed groups has launched an operation to retake the northern city of Raqqa, the de facto capital of Islamic State in Syria, the group said on Sunday.

The new offensive ratchets up pressure on Islamic State at a critical moment, with its fighters already battling an assault by Iraqi security forces on their remaining Iraqi stronghold in the northern city of Mosul. “The general command of the Syria Democratic Forces announces the blessed start of its major military campaign to liberate the city of Raqqa,” Jehan Sheikh Amad, an SDF spokeswoman, told a news conference in the Syrian town of Ain Issa, 50 km (30 miles) north of Raqqa , reports Reuters.

The United States would be coordinating air strikes with the SDF, which includes the powerful Kurdish YPG militia and has been the main partner on the ground in Syria for the U.S.-led coalition against Islamic State.

Raqqa is the Syrian bastion of the ultra-hardline Sunni Muslim Islamic State, from where it runs training camps and directs operations. The group has been overseeing civilian life in the city including bakeries, banks, schools and mosques.

Brett McGurk, U.S. President Barack Obama’s counter-Islamic State envoy, told reporters during a stopover in Amman that the “initial phase” of the Raqqa offensive had begun.

“The Raqqa campaign will proceed in phases, deliberate phases, there is an isolation phase which began today and subsequent phases to ensure we kick out Daesh out of Raqqa,” McGurk said.

The SDF statement said the operation aimed to “isolate and then topple the capital of international terrorism”, indicating an initial phase aimed to surround Raqqa before any move to seize it. No timeframe was given.

Planning for the Raqqa offensive has been complicated by factors including Turkish concerns about expanding Kurdish influence in northern Syria and fears of Arabs who are worried about a Kurdish presence in the predominantly Arab city.

The SDF said on Thursday it had rejected any Turkish involvement in the Raqqa campaign. The Turkey-backed rebels fighting under the Free Syrian Army banner and the YPG and its allies are hostile to each other, and have clashed repeatedly.

Turkey has said Raqqa would be targeted in its own operation against Islamic State in northern Syria, which it is waging with Syrian Arab rebels.

McGurk said the “vanguard” of SDF forces entering Raqqa would be comprised of ethnic Arabs, not Kurdish fighters who form the backbone of SDF forces.

“When it comes to Raqqa we want a force that ultimately liberates Raqqa that is primarily from the local area, Arabs from the area, and so we have trained many of these fighters and that force will continue to grow as we get to the subsequent phases of the campaign,” McGurk told reporters.

The SDF also said Arab groups would be taking part in the operation and called on Raqqa’s civilians to avoid areas where Islamic State militants are present and to go to “liberated territory”.

An attack on Raqqa has been long expected, with U.S. Secretary of Defense Ash Carter saying on Oct. 25 that the battle to retake it would “overlap” with the assault on Mosul.