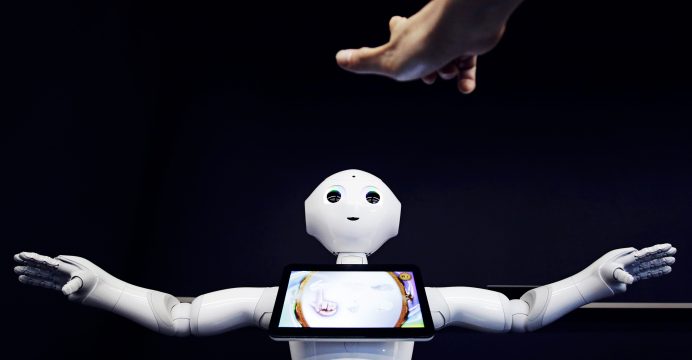 A material from shapeshifting planes could heal human flesh

Get your mind out of the gutter. The correct answer is polyvinylidene fluoride, a material NASA researchers have refined for use in morphing aircraft that shapeshift in response to their environment. But wait! There’s more: It can also kickstart the human body’s healing process.

Because of its potential to heal the world and make it a better place, the polymer’s inventors, Mia Siochi and Lisa Scott Carnell, have now turned it over to the public through NASA’s Technology Transfer Program. Through that process, companies license NASA technology for cheap and turn it into products to sell to non-astronauts. But transforming space stuff into Earth stuff isn’t always smooth. Turned-over technology can get lost inside the catalog, stall out in the bowels of a company, or become part of a product the original inventors wouldn’t approve of.

Polyvinylidene fluoride certainly has the potential to do what its inventors hope it will: heal humans. It’s a so-called electroactive substance that gins up an electric field when stimulated. The researchers developed a process to align and weave its fibers—which in previous productions were strewn randomly—into a kind of high-tech gauze.

Although that work began with aerospace in mind, Siochi and Carnell quickly saw its medical applications, including how it could help wounded astronauts—a medical gap NASA has noted in its technology roadmap. They knew the body’s natural electrical properties already help it heal: Damaged skin layers generate a voltage across themselves (TIL, anyway), which creates an electric field that healing cells called keratinocytes move toward, like geese that align their flight with Earth’s poles.

And they saw that when they warmed the polymer to body temperature, its electric field activated. Adult stem cells responded to that electric field. What if, Carnell thought, they put the gauze directly on a person’s body and let their natural warmth activate its electricity?

Doctors have long voltaged the body to jolt cell migration and coax healing along. But normally, a patient has to go into the hospital and plug in to a device. Siochi and Carnell’s gauze could do the same duty as an unassuming, apply-at-home first-aid pad, pressed like the cushion of a Band-Aid to the skin.

NASA liked the idea, and how it could help astronauts and the rest of us. And that’s when the Technology Transfer office took notice. Let’s take this to the commercial space, they said.

Out of the Ivory Tower

To market, to market is actually part of NASA’s job. It’s in the 1958 Space Act, which declared that the then-newborn agency must spin off its innovations in the direction of the earthbound humans who bankroll its development.

The Technology Transfer office curates a catalog: NASA’s best-working innovations that would feel at home in the private sector. They’re the NASA equivalent of that power station at the Goodwill where you can test toasters before you buy, except a toaster expert tests them for you. They then brainstorm industries and companies that could use them—perhaps Johnson & Johnson would like to learn more about electroactive gauze, for instance? Interested parties can license patents, which program executive Dan Lockney says usually cost $5,000 to $10,000. Software licenses are mostly gratis.

Sometimes, the great unknown of the buyer concerns scientists, who are rightly attached to their inventions. They as individuals don’t get a say in who licenses their technology, or what they use it for. “If it lands with the right company that’s well-intentioned and can carry it forward successfully, it’s a win all around,” says Carnell. “But sometimes that doesn’t happen. That’s where some of the apprehension comes in.”

Still, even if NASA’s inventors aren’t always happy, NASA as an entity has to put these patents up for grabs. “Congress says, ‘We want you to do this this and this,’ and we go do it,” says Lockney.

But Lockney believes the more philosophical reasoning behind the legislation is right. Being part of an organization that exists solely to use taxpayer dollars to study and explore the cosmos is a form of privilege. Tech transfer is a way to say, “Thanks, citizens!” instead of simply having the best’s brightest inventions disappear inside the black box of a satellite.

Sometimes that does happen. Not every NASA light-bulb has a socket in the corporate world.

But when tech transfer goes well, it goes really well, fulfilling the agency’s mission and making inventors feel fuzzy about their societal contributions. An anti-gravity suit now comes in the form of LifeWrap, a low-cost garment that stops post-partum hemorrhaging. The camera in your cell phone came from a Jet Propulsion Laboratory prototype. Peanut butter sandwiches now feature smeared-in omega fatty acids that came from culinary experiments for long-duration spaceflight. And to all of the leads in Medtronic’s pacemakers: NASA says you’re welcome.

There are also spinoffs you’ll never see, like those for One Percenters (who have perhaps found a way to avoid most of their taxes anyway): A responsive and precise temperature and fluid control system has made its way into a $5,950 Blossom coffee machine that will drip water of an exact Fahrenheit onto your temperature-controlled Kopi luwak beans. In this case, the guy who worked with the control-loop technology at NASA now works for the coffee company, so he is probably feeling fine.

For Siochi and Carnell’s part, they hope their gauze will be adopted into a good home, one that will help their little invention make a big difference—saving people from pain and expensive doctors’ visits, rather than giving them a bespoke brew.