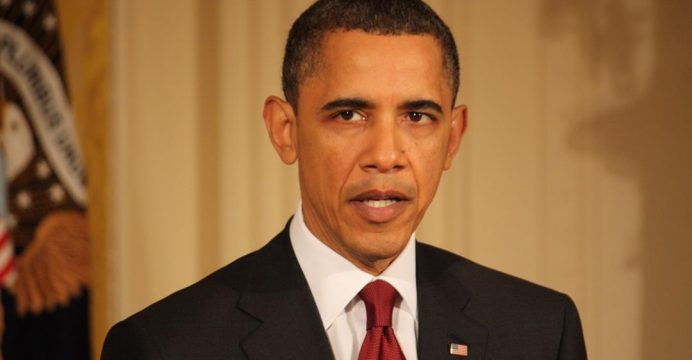 President Barack Obama pressed Democrats black and white to vote in droves for Hillary Clinton on Wednesday, warning Donald Trump was a threat to hard-earned civil rights, the country, and the world.

Painting the choice next on Tuesday in the starkest terms yet, America’s first black president trashed Trump as “uniquely unqualified” to be president, reports BSS.

Clinton remains the firm favorite to become the 45th US president, but with six days until Election Day Democrats are leaving nothing to chance given Trump’s radical stances.

US President Barack Obama speaks at a rally for Democratic presidential candidate Hillary Clinton at the University of North Carolina at Chapel Hill on Nov 2, 2016

“The fate of the Republic rests on your shoulders,” Obama told voters in Chapel Hill. “The fate of the world is teetering and you, North Carolina, are going to have to make sure that we push it in the right direction.”

Decrying electoral apathy, Obama reminded voters that he had won North Carolina by the slightest of margins in 2008 and that just decades ago African Americans were cheated out of their right to vote in parts of the United States.

“I won North Carolina by two votes per precinct,” he said “How can you say your vote doesn’t count?”

Around a quarter of North Carolina’s population is black.

A string of Democratic Senate nominees are on the ballot too. The party will need a strong showing if it wants to win back control from Republicans.

In Chapel Hill, Obama took aim at North Carolina Senator Richard Burr, who he tried to tether hard to Trump. For the last two years, Obama has faced a Republican-controlled Senate which sought to derail his agenda and hold up his selection of Supreme Court Justice Merrick Garland.

Republicans countrywide have been coming under fire for suggesting they may not confirm any Clinton Supreme Court nominee — leaving the top court in the land with eight instead of nine justices. On the eve of the election Obama will travel to New Hampshire where there is another tight Senate race, with incumbent Republican Kelly Ayotte facing a tough challenge from Democrat Maggie Hassan.