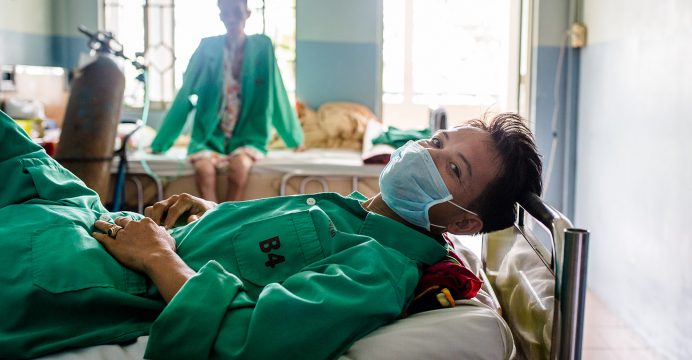 The innovation needed to maintain tuberculosis (TB) treatment and care in the face of natural disasters and weak health systems. Studies conducted on TB interventions implemented in the wake of the 2010 Haiti earthquake and the recent West Africa Ebola epidemic, challenges faced in rural areas of China, and new technology used to dramatically reduce stock-outs of essential medicines in Ethiopia were announced today at the 47th Union World Conference on Lung Health, convening 26-29 October in Liverpool, UK.

“Public health workers are put to extreme tests in the face of deadly natural disasters. They will go the distance to stop TB and ensure that patients can access the care they need, even in the most chaotic conditions,” said José Luis Castro, Executive Director of the International Union Against Tuberculosis and Lung Disease (The Union). “Even when the health system is weak, some solutions can still have a massive benefit on a country’s capacity to deliver health care,” said Dr Paula I Fujiwara, Scientific Director, The Union. “When it comes to TB, anything that delays a diagnosis or interrupts treatment enables the disease to spread and can even lead to drug-resistance in some cases. This is what makes it so critical to continue providing care despite the environmental challenges.”

The following studies were announced today at the Union World Conference. Abstract numbers refer to studies within the Scientific Highlights resource available to journalists.

In a study conducted by the US Centers for Disease Control and Prevention (CDC), researchers investigated the potential benefit of systematic cough screening for all patients appearing in TB diagnostic and treatment facilities, inpatient and outpatient clinics, and HIV clinics after the 2010 earthquake in Haiti. Results showed persistently high rates of new TB cases after the earthquake, and that systematically screening all patients for presence of cough was an effective way to diagnose TB. From 2012-2015, over 215,000 patients from 110 health facilities were screened for cough. Of those, 89% underwent sputum smear microscopy for acid-fast bacilli, a basic laboratory technique where a technician examines a sample of sputum through a microscope and looks for the presence of TB bacteria. Of the patients tested using this method, 15% tested positive for the presence of TB bacteria. TB rates in Haiti are the highest in the Western hemisphere, with 200 new infections per 100,000 persons/year. The authors recommend strengthening and expanding systematic TB screenings using presence of cough as a measure to determine if a patient should be screened for TB.

The most recent Ebola epidemic generated mistrust in the healthcare system. Researchers examined how mistrust towards the medical community beginning with the Ebola epidemic translated into people withdrawing from TB treatment in Guinea. The study shows community tracing of patients, where TB patients were contacted by phone and home visits, were largely effective in maintaining contact with patients. When patients withdrew from TB treatment, it was mostly due to social factors—burials, school, work, and social obligations—not mistrust of the health system. Community health workers traced 1,254 people (24% of whom were also living with HIV) under TB treatment from 25 health facilities and identified those that missed at least one treatment. The results showed that 78% were properly traced, including 21% who died and 79% who restarted treatment. For 66% of those who missed an appointment, the reasons of absence were: social reasons (56%), travel (20%), health staff availability (17%), refusal (4%), and access 3%. The study was conducted by the Damien Foundation, the Ministry of Health of the country of Guinea, and Gamal Abdel Nasser University, Guinea.