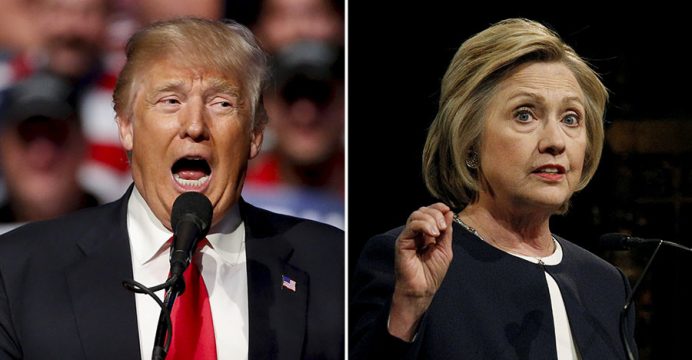 Donald Trump and Hillary Clinton launched bitter attacks on each other’s character on Tuesday as a new poll suggested the White House race has tightened in the final week.

Trump stormed into Democratic territory in Wisconsin to try to use suspicion generated by an FBI probe into Clinton’s emails to open an unlikely path to victory on November 8, reports BSS.

But, with political tension spilling over into financial markets, 69-year-old Clinton was determined not to lose her advantage, firing up Florida crowds with attacks on Trump’s attitude to women. 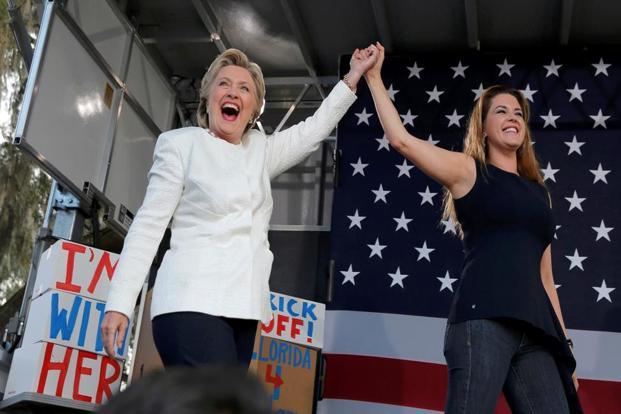 But he received a boost Tuesday when an ABC News/Washington Post tracking poll showed him leading Clinton by 46 to 45 percent.

He boasted about the new numbers as he addressed a raucous crowd — chanting “Lock her up!” and “Drain the swamp!” — in Eau Claire, Wisconsin, before turning the knife.

“The Clinton’s are the sordid past and we will be the bright and clean future,” he announced, to rapturous roars.

But if Clinton was rattled by the poll — or by the renewed interest in her email server — she did not show it at a barnstorming rally in the swing state of Florida.

INSULTS HALF THE POPULATION

Clinton was introduced by Alicia Machado, a former Miss Universe whom Trump, then the owner of the pageant, publicly humiliated by mocking her post-victory weight gain.

“Can we just stop for a minute and reflect on the absurdity of Donald Trump finding fault with Miss Universe?” Clinton snorted.

Trump’s doctor says he is more than overweight at 236 pounds (107 kilograms).

“What about our girls? What happens to their confidence, their sense of self-worth?” she demanded, warning against a president “who insults more than half the population.”

And she pivoted to the notorious tape where Trump is overheard on a hot mic bragging about being able to grope women and get away with because he is a star.

“And I have to tell you, since that tape came out, 12 women have come forward to say: ‘What he said on that tape is what he did to me,'” Clinton said. Trump denies these allegations.

The close poll spooked the markets, which had expected the former secretary of state to comfortably defeat a populist who economists fear could plunge the world into recession.

US stocks closed down 0.7 percent and the Vix Volatility or “fear index” jumped to its highest level since Britain voted to leave the European Union.

But no matter how close the popular vote, in order to win the White House, Trump must take at least one normally Democratic state, the swing states and the Republican heartland.

Wisconsin backed President Barack Obama in 2012, but if Trump can win its 10 votes, it could put him over the 270 threshold and win him the keys to 1600 Pennsylvania Avenue.

But this remains a long shot. The New York Times statistical model gives Clinton an 88 percent chance of winning, while respected data tracking website FiveThirtyEight says she has a 74 percent chance of victory.

Nevertheless, the tumultuous presidential race — which has featured footage showing Trump boasting of sexual assault and claims of Russian interference in the contest — may have a few twists and turns left in store.

On Monday, Trump was hit by fresh allegations in a detailed report by The New York Times that he not only dodged paying income tax but did so in a way that has since been outlawed.

This may not be enough to turn public attention away from a revived FBI investigation into whether Clinton put US secrets at risk by using a private email server while serving as secretary of state.

Clinton’s campaign has spent three days berating FBI Director James Comey for revealing to lawmakers that the bureau is looking anew at her use of a private email server while at the State Department.

Team Clinton was furious that Comey made his announcement without any new evidence of wrongdoing, but insists the scandal has not torpedoed her candidacy.

“We do not see any evidence that the Comey story has had an impact on our polling,” a senior aide told reporters.

“If anything, it’s angered our supporters and been a motivating factor, but it doesn’t seem to be affecting the overall vote,” he said, writing off what he dubbed “bad polling.”

Obama and Vice President Joe Biden both hit the campaign trail for Clinton on Tuesday and have a full schedule for the week, hoping to push her past Trump in the home stretch.

Obama — who was in Ohio — is having what his spokesman called a “heck of a good time” making the case for Clinton, calling his full schedule “an indication of exactly how big he thinks the stakes are in this election.”