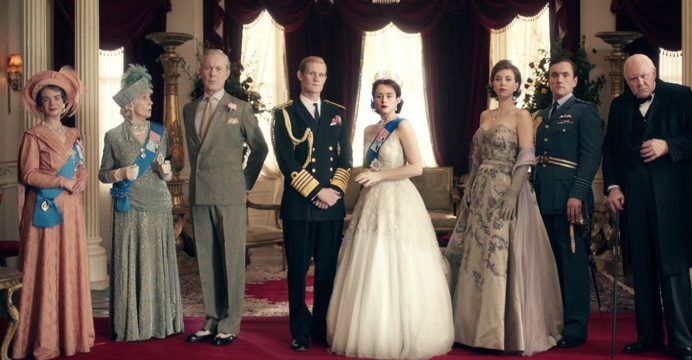 The writer of hit film “The Queen” returns to his favorite subject this week with a new Netflix series offering perhaps the most intimate portrait yet of Britain’s head of state.

All 10 episodes of “The Crown” will be available from Friday, continuing a tradition of big-budget original content that has seen the streaming service lavished with praise for such hits as “House of Cards” and “Narcos.”

The series comes from the pen of Peter Morgan, who lifted the veil on the private world of Elizabeth II in “The Queen” (2006), which was directed by Stephen Frears and earned Helen Mirren an Oscar in the title role.

Morgan went back to Britain’s longest-serving monarch with the stage play “The Audience,” which concentrated on her relationship with her various prime ministers — and which also starred Mirren.

While these previous dramas depicted a mature and then aging Elizabeth II, Morgan and director Stephen Daldry (“Billy Elliot”) start out “The Crown” with a young Princess Elizabeth as she marries Philip Mountbatten in the uncertain aftermath of post-war Britain.

Netflix has already committed to a second season and has so far dedicated over $100 million to “The Crown,” according to several reports.

“Nothing you or His Royal Highness does is a private matter,” Winston Churchill warns the 25-year-old Elizabeth, as she embarks on a very public life which has seen her become arguably history’s most recognizable royal.

For all her fame, the 90-year-old monarch has managed somehow to reveal little of herself over 64 years on the throne.

Played by Claire Foy, whose last royal role was as Anne Boleyn in the BBC’s 2015 miniseries “Wolf Hall,” the Elizabeth Windsor of “The Crown” is a level-headed young woman who is nevertheless prone to moments of levity and sensuality.

Morgan, who plans to dedicate one season of “The Crown” to each of the six decades of the queen’s reign, starts with her difficult ascension to the throne, stewarded by Churchill, after the sudden death of her father George VI.

Morgan and Daldry offer up a nuanced portrait of a woman who combines reserve with grit, an heiress to an ancient tradition who manages somehow to be thoroughly modern.

A woman very much plunged into a man’s world, she finds herself in the alien position of being of higher standing than her husband, treated with deference by the prime minister.

Central to Morgan’s narrative is Elizabeth’s relationship with Philip, which is more complex and passionate than the formal, sometimes stilted, image of the union served up for the public.