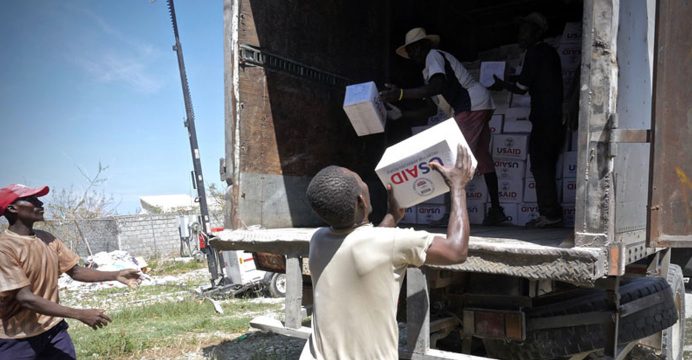 Eight trucks were destined for Jeremie and six for Les Cayes. A total of 34 trucks carrying non-food items (NFIs) have now been deployed to Grand Anse and South department since the emergency started.

The aid items were provided by the USAID’s Office of Foreign Disaster Assistance (OFDA) and have been distributed through local NGOs to over 28,000 households. Another 14,000 families are currently receiving NFIs in ongoing distributions organized by partner agencies and the Haitian Government.

During the week IOM teams assessed 103 out of the 204 evacuation shelters in the South and Grand Anse Departments, where over 141,000 Haitians have been sheltering since the hurricane destroyed their homes.

In the aftermath of Hurricane Matthew the numbers of lives lost has reached 546, according to the Directorate of Civil Protection (DPC). Some 90 percent of homes in the South and Grand Anse department have been damaged or destroyed by the Hurricane, and 80 percent of the electricity network was smashed in the Southern peninsula.

IOM also conducted a cholera rapid assessment in the most affected departments, where UNOCHA has reported 2,200 suspected cases of cholera. Some 36 health facilities were entirely destroyed by the storm.

“IOM is now fully deployed in Jeremie and Les Cayes. We have a relatively large stock in Jeremie, which we are starting to distribute directly to the population, and we are starting to move out to remote areas. Our stock in Les Cayes was completely distributed, and that is why we brought the second convoy to replenish, and we will continue to do that,” said Gregoire Goodstein, IOM Chief of Mission in Haiti.

As vulnerability to human trafficking increases in the aftermath of disasters, IOM co-led with the local authorities the second meeting of a protection working group against human trafficking. Priority actions of this plan includes protection and referral mechanisms, including establishing a hotline, safe-houses, and psychosocial support, as well as mass sensitization and communication tools for the aﬀected areas.

According to UN estimates, 2.1 million individuals have been aﬀected, and 1.4 million people are in need of humanitarian assistance. IOM launched a USD 20 million appeal to provide emergency shelter and materials for the rehabilitation of damaged houses, and to control cholera in the most affected areas.