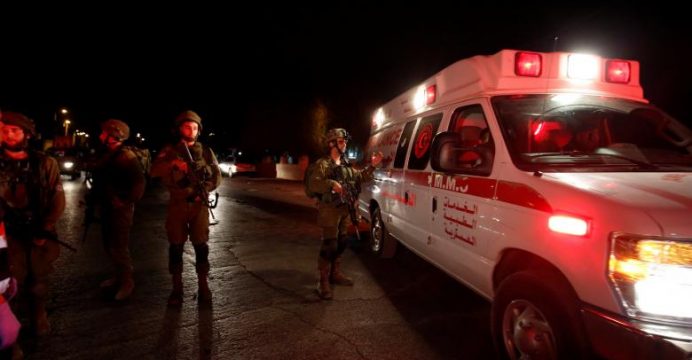 A Palestinian assailant shot and wounded three Israeli soldiers in the occupied West Bank on Monday and was killed by troops returning fire, the Israeli army said.

“(A) Palestinian gunman arrived at a (military) crossing at the entrance to Ramallah and opened fire at forces at the scene, injuring three soldiers. In response to the immediate threat, forces shot the assailant,” an Israeli army statement said.

An Israeli ambulance service spokesman said one soldier suffered moderate gunshot wounds and two others were lightly hurt. A photo circulated by the military showed an AK-47 assault rifle on the ground.

Over the past year, Palestinians, many acting alone and often using rudimentary weapons and cars, have killed at least 35 Israelis and two visiting Americans in similar attacks.

During the same period, at least 225 Palestinians have died in violent incidents in the West Bank, East Jerusalem and the Gaza Strip. Of those, Israel has identified 153 as assailants, while others were killed during clashes and protests.

Palestinians have accused Israeli police and soldiers of using excessive force against many of the attackers. In some cases, Israel has opened investigations into whether excessive force was used.