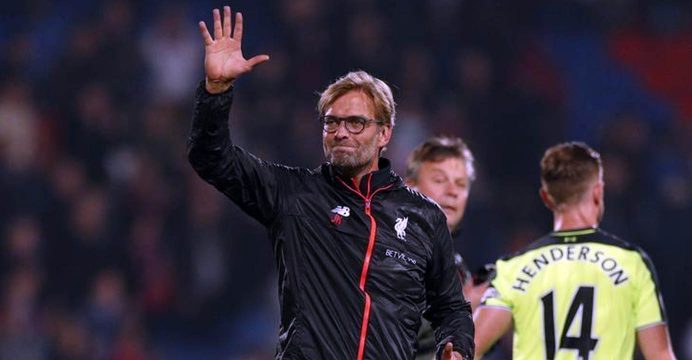 Juergen Klopp criticised Liverpool’s opening 15 minutes as “childish” but his men then made beating Crystal Palace seem like mere child’s play with Philippe Coutinho their master puppeteer on Saturday.

After the 4-2 victory at Selhurst Park that puts Liverpool alongside Manchester City and Arsenal atop the league, Klopp revealed his perfectionist’s streak when outlining the errors that made the contest much closer than it should have been.

Yet even the demanding German had to concede that during his year-long reign at Anfield, he could barely remember watching such attractive attacking fare from his band of red-shirted cavaliers.

“The first 15 minutes, I was not too happy. It looked like childish football, but no greed, no direction,” Klopp reflected on BT Sport after the goals from Emre Can, Dejan Lovren, Joel Matip and Roberto Firmino.

“But then we scored and we started playing football and I’m not sure that we’ve played a lot of times better than we played offensive-wise.

Klopp’s Liverpool still offer a defensive frailty that twice allowed Palace’s central defender James McArthur to head the home side back into a game in which they were being largely outclassed.

Yet once again, the visitors produced such pyrotechnics in attack, with Coutinho looking simply the most talented midfield firelighter in the league, that it was easy to overlook the mess at the other end.

The Brazilian had a header tipped on to the post brilliantly by Steve Mandanda, he initiated the opening goal and his corners were converted by Lovren and Matip. It was the sort of virtuoso display that has become the norm rather than a rare starburst.

Yet Klopp, never one to rave about individuals when he can concentrate on the team, refused to go too overboard.

Eventually, Klopp had to concede: “He’s now 24, his work rate is outstanding. That’s how it is. He’s a proper football player. All good.”

That was enough. There was no point in raving any more in public about Coutinho’s gifts with the likes of Real Madrid, reportedly, already getting keener by the day on buying and polishing a new Brazilian diamond.