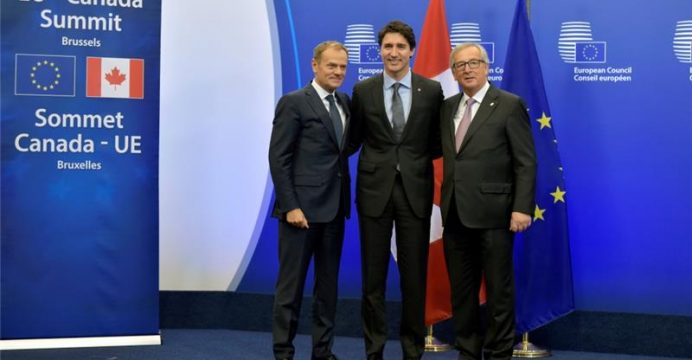 The European Union and Canada signed a historic free trade agreement on Sunday that is promised to generate jobs and economic growth on both sides of the Atlantic.

Critics, however, denounced the deal as power-grab by multinational corporations. Some 100 anti-globalisation protesters clashed with police outside the venue in Brussels, trying to break down barriers in front of the main entrance and hurling red paint, reports Aljazeera.

Canadian Prime Minister Justin Trudeau signed the treaty along with the heads of EU institutions, a step that should enable a provisional implementation of the pact early in 2017 with the removal of most import duties. The Comprehensive Economic and Trade Agreement’s (CETA) passage has not been smooth.

French-speakers in southern Belgium – a minority within their own small country and accounting for less than one percent of the 508 million EU consumers likely to be affected by CETA – raised objections that held up the deal until a breakthrough on Thursday, confirmed by regional parliamentary votes on Friday.

The deal must still clear some 40 national and regional parliaments in Europe in the coming years to enter fully into force. Nick Dearden, of the UK-based group Global Justice Now, told Al Jazeera the agreement was “a ticking time bomb”.

“I wouldn’t be too sure CETA is out of the woods. CETA isn’t a traditional trade agreement. It isn’t mostly about reducing tariffs. It’s mostly about giving big business more power over our legal system, over our democratic standards and regulations, over every aspect of our life. And that’s why there’s been such huge opposition to it here in Europe.”

The CETA agreement is seen as a springboard to a larger EU deal with the United States, known as the Transatlantic Trade and Investment Treaty (TTIP), which has been the target of labour unions and environmental and other protest groups.

EU Trade Commissioner Cecilia Malmstrom said TTIP talks were not dead, contrary to what some politicians in Germany and France have said, but would need to wait for the next US president – taking office in January – to resume. Supporters say CETA will increase Canadian-EU trade by 20 percent and boost the EU economy by 12 billion euros ($13 billion) a year and Canada’s by C$12 billion ($9 billion).

For Canada, the deal is important to reduce its reliance on the neighbouring United States as an export market. For the EU, it is a first trade pact with a G7 country and a success plucked from the jaws of defeat at a time when the bloc’s credibility has taken a beating from Britain’s vote to leave.

“This has been a very long process. A huge majority of people in Europe are in favour of Europe, but there are concerns and we need to engage with them,” Malmstrom said. “The Commission cannot do that alone.”