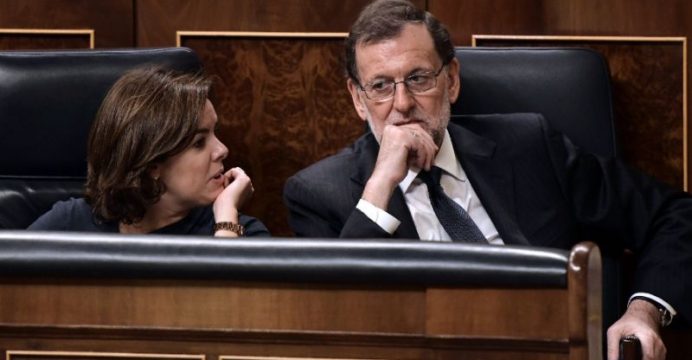 Spain turns the page on a 10-month political crisis on Saturday as lawmakers ready to vote the conservatives back in power, although at the head of a government with the unprecedented opposition.

Aided by divisions among his rivals, Prime Minister Mariano Rajoy is widely expected to win a crunch parliamentary confidence vote which will see him officially re-appointed as Spanish leader, reports BSS.

At the same time, protesters unhappy about corruption and sweeping spending cuts during Rajoy’s first term are set to take to the streets, fearing his new government will be more of the same.

In a sign of things to come, party leaders in this week’s pre-vote parliamentary debate came out fighting, criticising Rajoy and each other just as they did for 10 months as the country went through two inconclusive elections.

Rajoy’s Popular Party (PP) won both elections but without enough seats to rule alone, and as no political grouping was able to agree on a viable coalition, Spain looked set for unprecedented third elections in less than a year.

This all changed last weekend when the Socialists swallowed a bitter pill and decided to abstain in Saturday’s confidence vote to avoid more elections — a move that came after weeks of in-fighting that saw their chief Pedro Sanchez ousted.

But this gives Rajoy, the official prime ministerial candidate, enough traction to see him through the vote. – ‘Turbulent’ term – Unlike when he came came to power in 2011 with an absolute majority, however, Rajoy’s party will only have 137 seats out of 350 in parliament and will face huge opposition, forcing him to negotiate every law.

“Rajoy, a king without a kingdom,” online daily El Espanol summed up in an editorial. First on his list will be to approve a 2017 budget under EU pressure, with Brussels saying Spain needs to implement at least five billion euros ($5.5 billion) in spending cuts to reduce the deficit. But this is likely to face stiff opposition in parliament and on the street, and already Rajoy’s rivals have pledged to vote against it.

During this week’s debate, the Socialists and far-left Podemos — now the country’s third political force — vowed not to go easy on him.

Rajoy, meanwhile, called on the opposition to let him govern effectively, pointing to the return to growth and drop in unemployment under his watch after a devastating crisis, and the necessity to keep this going.

Political analyst Pablo Simon said there was “no doubt” his term in office would be the most “turbulent” ever in Spain and could prompt Rajoy to call early elections if he keeps hitting brick walls. But he predicted Rajoy may not have quite as hard a ride as expected.

The Socialists, for one, will need time to rebuild in the opposition and will not want early elections, knowing they would fare badly after their very public breakdown.

The PP also has a majority in the Senate, and may be able to form pacts with smaller parties in the lower house to see laws through, Simon added.