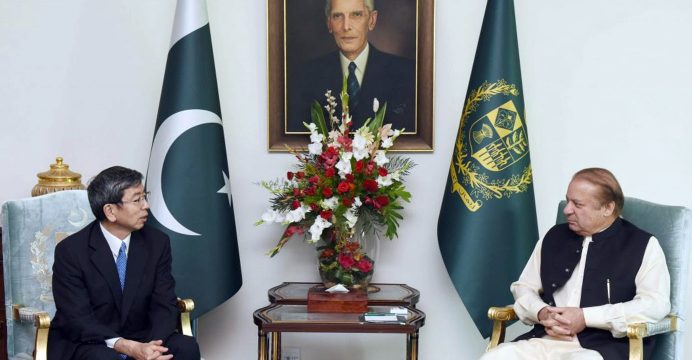 The meeting came on the opening morning of a 2-day visit to Pakistan. The ADB President also met with the Finance Minister and ADB Governor, Senator Ishaq Dar, and later with the Governor of the State Bank, Ashraf Mahmood Wathra, along with chiefs of some of Pakistan’s large commercial banks, for a session on infrastructure finance, including the potential for Islamic finance.

He also had a chance to meet with International Monetary Fund (IMF) Managing Director Christine Lagarde, who was visiting the country.

Tomorrow, Mr. Nakao will give a Special Address at the opening of the Central Asia Regional Economic Cooperation Program (CAREC) 15th Ministerial Conference in Islamabad.

In his meetings, the ADB President noted recent improvements in Pakistan’s macroeconomic performance. Higher external inflows have led to an increase in foreign exchange reserves and a pickup in gross domestic product growth, which is estimated at 4.7% in 2016 and 5.2% in 2017. The country has significantly strengthened macroeconomic fundamentals. Inflation has been brought down to low single digits, and the budget deficit has been markedly reduced.

Pakistan graduated from a three-year-IMF program in September 2016 under which the country has also taken major strides on comprehensive structural reforms. A tax reform initiative has just begun to improve revenue performance and there has also been progress in public enterprise reform, business climate improvements, and restructuring of the power sector, supported also by ADB and the World Bank.

“While there are still key challenges to be addressed, I am highly encouraged by the government’s resolve to stay on course with structural reforms to reduce the fiscal deficit and contain inflation to boost growth,” he said. “Continued progress depends on addressing remaining issues such as governance and security, reviving the agriculture sector, and increasing exports.”

Under an ADB country partnership strategy (CPS) 2015-2019 endorsed in August 2015, ADB will support the government’s priorities focusing on infrastructure upgrades and institutional reforms. Sovereign finance for the last three years 2013-2015 was on average $1.5 billion.

Six sectors are targeted under the CPS—energy; transport; agriculture, natural resources and rural development; water and other urban infrastructure and services; public sector management; and finance. The assistance for 2016 will amount to about $1.46 billion, of which $737 million has already been approved for projects in energy, irrigation, public sector enterprise reform, flood protection, and highways, among others. This is complemented by more than $360 million of cofinancing from bilateral and multilateral sources including funding for the M4 motorway with the Asian Infrastructure Investment Bank and the UK Department for International Development.

ADB is ready to consider increasing its support for continued reform and development efforts of the country.

ADB is also helping to decongest Pakistan’s overburdened transport systems, upgrading highways and provincial roads to position the country as a future regional trading hub. Under the CAREC framework, ADB is working with Pakistan to expand its key north–south highway network to help boost the country’s trade and connectivity with other CAREC member countries.

In the social sector, ADB is assisting the Benazir Income Support Programme in reaching out to women beneficiaries through a cash transfer program of $430 million that was approved in 2013. It is helping Pakistan extend income support to poor families and the country’s most vulnerable groups.

To facilitate greater private sector participation in the country’s public service delivery and infrastructure development, ADB is preparing public-private partnership (PPP) projects for Sindh and Punjab for approval this year. ADB and the Government are also negotiating a framework agreement for delivery of transaction advisory services starting from 2016.

Pakistan is a founding member of ADB. As of September 2016, ADB had provided $27.3 billion of sovereign and $1.0 billion of non-sovereign assistance to Pakistan.

During the day, Mr. Nakao will open a photo exhibit commemorating 50 years of ADB’s partnership with the country.