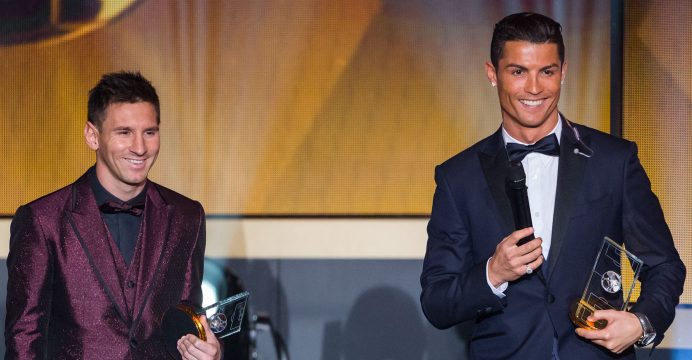 Cristiano Ronaldo and Lionel Messi will resume their perennial battle to be crowned the world’s best footballer after they headed the shortlist of 30 players for the 2016 Ballon d’Or announced on Monday.

Despite a dip in form this season, Ronaldo, who inspired Portugal to the Euro 2016 title and Real Madrid to the Champions League crown last season, is hot favourite to regain his title.

He is one of six Real Madrid players on the list with Gareth Bale, Toni Kroos, Luka Modric, Sergio Ramos and Pepe as the European champions boast more candidates than any other club.

Messi and his two Barcelona striking partners, Neymar and Luis Suarez, scorers of more than a century of goals between them in 2016, also feature on the list along with team mate Andres Iniesta.

Romantics will be delighted to see that Leicester City, fairytale winners of the Premier League, are represented by pauper-to-prince striker Jamie Vardy and England’s players’ player of the year, Algerian Riyad Mahrez.

Mahrez and Borussia Dortmund’s Gabon striker Pierre-Emerick Aubameyang are the only players on the list who hail from outside Europe or South America.

France, with Antoine Griezmann, Hugo Lloris, Dimitri Payet and Paul Pogba, and Argentina, with Messi, Gonzalo Higuain, Sergio Aguero and Paulo Dybala, are the best-represented nations with four players each.

France Football magazine, who have awarded the Ballon d’Or every year since 1956, announced the shortlist, with the winner set to be announced in January.

For the past six years it was the FIFA Ballon d’Or until world football’s governing body ended its association with the award in September.