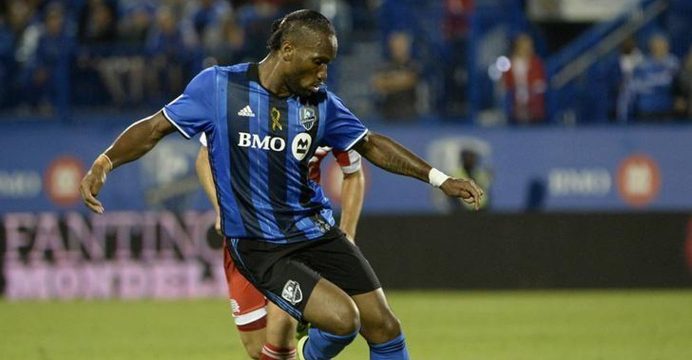 Didier Drogba was absent again when the Montreal Impact played the New England Revolution on Sunday, falling further out of the team’s picture.

The Ivorian striker refused to play last week after learning that he would not be in the starting lineup against Toronto FC, an act that earned him a fine from Major League Soccer (MLS).

The Impact indicated that the impasse had been settled earlier in the week, but Drogba did not train with the team leading up to the match against the Revolution, and Montreal coach Mauro Biello suggested the 38-year-old former Chelsea man is dealing with lingering discomfort from a back injury.

With the Impact relying more on other strikers recently, Drogba’s future with the club heading into the postseason became more of a mystery as the team backed into the playoffs without him in a 3-0 loss to the Revolution.

Montreal secured the fifth spot in the Eastern Conference on the final day of the MLS regular season.

The New York Red Bulls wrapped up top spot in the East, ending their campaign with a 2-0 win over the Philadelphia Union.

New York City FC used their 4-1 win over Columbus Crew to clinch the second seed ahead of third seed Toronto FC. DC United fell in at No. 4 and the Union No. 6.

The defending MLS Cup champion Portland Timbers will be watching the post-season from home after falling two points shy of sixth-place Real Salt Lake in the West.

FC Dallas drew 0-0 with Los Angeles Galaxy to secure the Supporters’ Shield, awarded to the team with the best regular season record, with 60 points.

The match came hours after Galaxy midfielder Steven Gerrard hinted that he will be leaving the U.S. and possibly returning to his old club Liverpool, via a farewell/thank you message on Instagram.

The Galaxy enter the playoffs as the No. 3 seed behind second-seeded Colorado Rapids.

The Seattle Sounders finish fourth, with Sporting Kansas City No. 5.