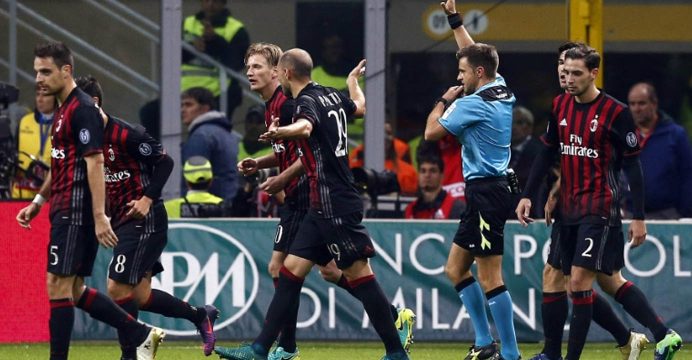 Ref got it wrong, slams Allegri as Milan stun Juve

The Turin giants had beaten Milan in the sides’ last nine meetings and, in front of 75,829 spectators, showed throughout a stirring encounter why they are being tipped to claim a record sixth consecutive ‘scudetto’ title at the end of the season.

But Juve’s failure to find a way past Milan’s teenaged goalkeeping sensation Gianluigi Donnarumma proved costly, and the visitors were given few favours by referee Nicola Rizzoli on their way to a second successive San Siro setback just over a month after suffering a 2-1 reverse to Inter Milan.

Pjanic looked to have finally broken the deadlock for the visitors when he spun away in delight to celebrate beating 17-year-old Donnarumma with a rasping free kick just after the half-hour.

But the Bosnia midfielder’s joy was short-lived.

Milan’s players surrounded Rizzoli claiming offside and after consultation with his touchline official he cancelled the goal.

Allegri said: “It’s clear that our goal was valid. I shouldn’t say it, but everyone will say it.”

He suggested Milan’s protests had influenced the officials’ decision.

“The first protests from Milan certainly put the pressure on, but we should focus on playing: anyway, this result shouldn’t alter the path we’re on.

“People say we played badly, but I feel that, tonight, we played well technically, and lost.

“I can’t find fault with the lads, they controlled the game and created shots and goalscoring chances. We shouldn’t worry about this result.”

Juve remain top but their second loss of the league campaign has added a new, dramatic twist to this season’s fight for the Serie A title.

Milan moved up to second to sit only two points adrift to signal their return to the fray after several seasons struggling to keep pace and falling down the pecking order in Europe.

The defeat also brought Juve within reach of Roma, runners-up in 2014 and 2015 and who could reclaim second place from Milan, and sit two points behind, if they account for Palermo on Sunday.

Napoli, a further two points off the pace following defeat to Roma a fortnight ago, will travel to basement side Crotone on Sunday looking for a morale-boosting result after a 3-2 Champions League reverse to Besiktas in midweek.

Milan fans, meanwhile, can look ahead with well-earned optimism.

Montella’s decision to inject his ageing side with former youth team players is paying dividends so far, and was given a further boost by Manuel Locatelli’s stunning second-half strike that beat Gianluigi Buffon in the 65th minute.

“I really don’t know how I did it, but I scored against the greatest goalkeeper in the world,” said Locatelli, who two weeks ago was practically inconsolable at the final whistle after a similarly impressive strike in a 4-3 home win over Sassuolo.

Montella, known as L’Aeroplanino (The Little Airplane) for the way he celebrated scoring goals while with Roma, had spent the past few seasons trying to hammer Fiorentina into title-contending shape.

He walked away from the club last year after a dispute with owner Andrea Della Valle, but has returned to Italy’s top flight on a mission.

After a bumpy start, the 42-year-old has transformed the hopes and dreams of a club that has been on a rollercoaster ride since even before Allegri, who led Milan to their last league title in 2011, was sacked in the wake of a stunning defeat to Sassuolo in January 2014.

“Congratulations to the lads, they deserve it,” said Montella.

“They got this far thanks to a lot of hard work and sacrifice. They showed their soul tonight and that’s how I want to see them play from start to finish from now on.”