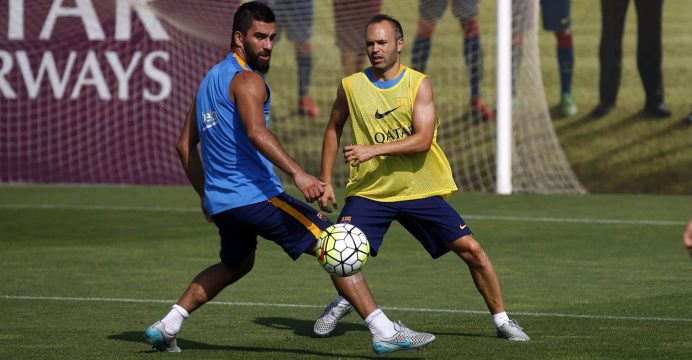 Six of the top seven face off, while Barcelona face a treacherous trip to Valencia in a blockbuster weekend of La Liga action.

However, should Atletico falter, Real Madrid could retake top spot when they host Athletic Bilbao on Sunday.

Barcelona head to Valencia in high spirits after Lionel Messi’s second Champions League hat-trick of the season ensured a nightmare return for former Barca coach Pep Guardiola to the Camp Nou in a 4-0 rout over Manchester City on Wednesday.

Messi was making his first start in a month after a groin injury, but looked anything but ring rusty in taking his tally for the season to 12 in 10 games.

“We have seen the calm that Messi has to finish inside the area as if he was in the school yard,” said Barca coach Luis Enrique.

Barca have now scored 17 goals in the only four matches this season Messi, Luis Suarez and Neymar have started together up front.

The all-star trio will be handed the task of blowing away a Valencia on the up under new coach Cesare Prandelli with Barca facing an uncertain few weeks ahead at the back.

Defensive lynchpin Gerard Pique will be sidelined for three weeks and left- back Jordi Alba the next fortnight after picking up ankle and hamstring injuries respectively against City.

Valencia took four points from a possible six against Barca despite enduring a horrible campaign last season and have won three of their last four games, including on Prandelli’s debut at Sporting Gijon last weekend.