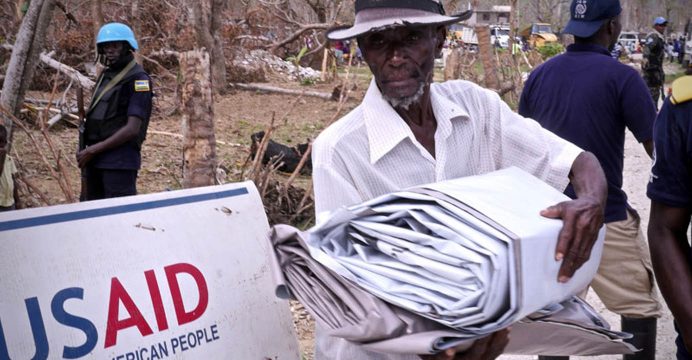 Distribution of Aid to Hurricane-Hit Areas is Accelerates in Haiti

IOM Haiti was initially tasked with managing the NFI pipeline and pre-positioning them in affected areas for rapid distribution through partner agencies on the ground.

But due to the large number of people affected, the difficult terrain and the fragile security situation, the Haitian authorities and donors asked IOM to jump start the distribution in Jeremie, one of the worst-hit areas.

IOM also transported and facilitated the distribution of food supplies provided by the UN World Food Program in Jeremie on 16 October. It will continue to distribute NFIs in Jeremie over the next three days.

IOM Haiti is also responding to urgent humanitarian needs in Les Cayes, another hard-hit area. A six-truck convoy carrying NFIs and escorted by the UN Stabilization Mission in Haiti (MINUSTAH) arrived on 16 October.

“The scope of the humanitarian challenges in Haiti exacerbated by Hurricane Matthew exceeds the human capacities and the funds we have available. But our mission has been working around the clock from day one to help the thousands of Haitians affected by the hurricane. I am particularly concerned about communities located in the most remote areas and we now need to reach them urgently,” said Gregoire Goodstein, IOM Haiti Chief of Mission.

More than 500 cholera cases have been recorded and some areas are reporting 60 new cases of cholera per day, up from 20 cases per week before the hurricane, according to the latest figures published by UNOCHA.

IOM Haiti’s health team is preparing to deploy and provide life-saving treatment to populations in five areas affected by the hurricane: the Grand’Anse, the South, Nippes, the South-East and the West departments. The teams will also oversee the surveillance and monitoring of cholera cases in these areas.

The emergency health response to sensitize the population and prevent the spread of cholera – funded by Canada – aims to target 450,000 people or 90,000 households over the next three months.

Currently, more than 1.4 million Haitians are estimated to be in need of humanitarian assistance, including 750,000 people in need of urgent help for the next three months. Over 40 percent of the 1.4 million who need humanitarian assistance are children, located mainly in the Grand’Anse and South departments. In addition, education has been disrupted for 116,100 children aged six to fourteen.

According to the latest UN and government figures, 175,509 people have been displaced from their homes since the passage of the hurricane on 4 October.

IOM, which leads the NFI/shelter working group, is currently working with the Haitian government and partners to design a shelter strategy that will be implemented in the reconstruction phase.

Meanwhile, 34 IOM emergency workers specialized in camp management, disaster risk reduction and protection are carrying out rapid assessments of the situation in the Grand’Anse and South departments.

IOM is also supporting the government in the two departments by registering people sheltering in schools, churches and other public buildings.

With an estimated 90 percent of homes in the South and Grand’Anse departments damaged or destroyed by the hurricane, IOM has launched an appeal for USD 20 million to provide an adequate humanitarian response.