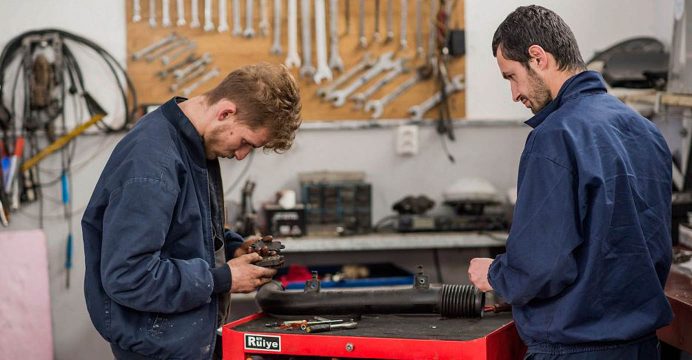 With 37 million people in informal or vulnerable jobs the equivalent of a third of the working population social safety nets in Eastern Europe, Turkey and Central Asia are increasingly coming under threat.

A new report by the United Nations Development Programme (UNDP) covering this region released today in Brussels shows that, while some 80 million people have joined the middle class since 2001 (out of a total population of 230 million), low commodity prices and slow growth in the European Union and the Russian Federation are making it harder for many people to find decent employment or access basic services such as health and education.

Women, migrant workers, youths and ethnic minorities such as the Roma are particularly at risk of falling behind. Women, for example, are 30 percent less likely to be employed than men, but perform two and a half times more unpaid domestic work. In addition, AIDS-related deaths have tripled over the last 15 years, in part because prevention and treatment have failed to reach the most marginalized.

Many of these problems reflect discrimination and exclusion that are not captured in official statistics. World Bank and Transparency International survey data cited in the report indicate that many people believe in the existence of a two-speed justice system, while a third of respondents said they have paid bribes to get treated medically.

“Many countries in this region used to enjoy relative job security, free and universal access to social services and smaller gender inequalities. But with vulnerability and exclusion on the rise, they are starting to resemble societies in other parts of the world,” said Cihan Sultanoğlu, the Director of UNDP’s Regional Bureau for Europe and the CIS.

The report, called “Progress at Risk”, also finds that approximately US$65 billion in annual illicit financial flows (due to misinvoiced foreign trade transactions) leaves the region annually. By capturing even a small fraction of these funds, governments in Eastern Europe, Turkey and Central Asia could invest huge amounts back into creating jobs, expanding social safety nets and closing the gender gap.

“This report is coming at the right time. Many countries around the world are implementing the Sustainable Development Goals (SDGs), which recommend that no one be left behind,” said Ms. Sultanoğlu. “If we can invest in bringing the most excluded and vulnerable groups up to speed, we will increase the prospects of reaching the SDGs in the region by 2030.”

The report calls for cutting the region’s high labor taxes to encourage formal employment, where social protection coverage and workers’ rights are more secure. In addition, alleviating social care and domestic work could improve education, employment, and earnings opportunities for women. This could in turn accelerate economic growth and improve levels of well-being for everyone.

Further, the report calls for improving the ability of statistical offices to gather reliable and independent data on inequalities, but also to respond to the needs of vulnerable groups more effectively. Such efforts would require more extensive public administration and civil service reforms, the authors say.