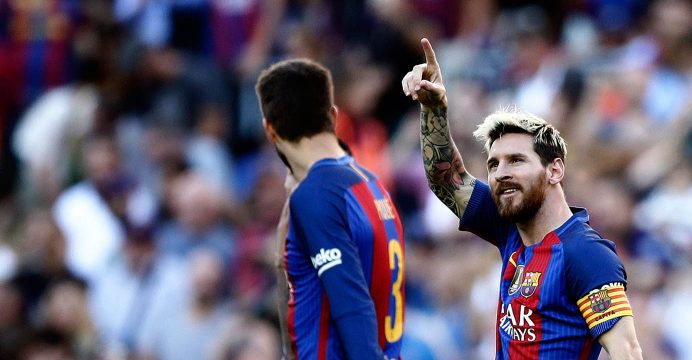 Real kept pace with their city rivals with four first-half goals of their own in a 6-1 win at Real Betis to snap a streak of four straight draws.

Barca were already 3-0 up thanks to Luis Suarez and a double from Rafinha when Messi was introduced after nearly a month out with a groin problem and wasted no time in scoring his ninth goal of the season.

“It was a complete performance,” said Barca boss Luis Enrique.

“We have Leo back and it took him no time to be back in top form.”

Messi wasn’t needed to be the match winner as Barca had the three points sewn up before the break.

Rafinha exchanged a one-two with Suarez before drilling a low shot that had too much power for German Lux and then bundled home a second 15 minutes later after Lux had saved Gerard Pique’s initial effort.

Suarez moved level with Antoine Griezmann as La Liga’s top scorer with six this season when he brilliantly turned away from the Deportivo defence when receiving Neymar’s through ball before slotting home the third.

Messi was introduced from the bench just before the hour mark and took just three touches to find the net when he flicked another Neymar assist over the helpless Lux.

Deportivo’s day was rounded off by a red card for Laure 25 minutes from time when for elbowing Neymar in the face.