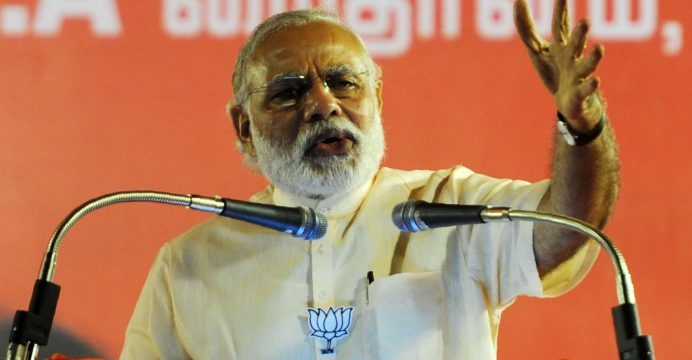 Indian politicians come forward every year on the Hindu festival of Dussehra to re-enact the slaying of a 10-headed demon, a climactic victory of good over evil depicted in a Hindu epic.

The demons that burned Tuesday all across India — in past years meant to represent social ills like corruption and pollution — were custom-made for a season of mounting tension with Pakistan. A demon towering over the Delhi neighborhood of Dwarka was green and wore a Pakistani flag. An effigy burned in east Delhi bore, among its 10 heads, the faces of Prime Minister Nawaz Sharif of Pakistan and his army chief, Gen. Raheel Sharif.

Prime Minister Narendra Modi of India was more cautious in his symbolism, presiding over a ceremony in Uttar Pradesh that culminated in the burning of an effigy with the words “May terrorism be wiped out for good” scrawled across its chest. Posters at the site lauded Mr. Modi as an “avenger” for ordering military strikes on Pakistani territory, portraying him as a macho man in a Stetson hat and sunglasses.

Nationalist language will almost certainly intensify as Mr. Modi’s Bharatiya Janata Party begins a crucial election campaign in Uttar Pradesh, a swing state where next year’s vote will set the tone for national elections in 2019.

“The mood in the country has undergone a change, and that is something he has understood,” said Neerja Chowdhury, a journalist and political analyst. “It is a restless mood, an angry mood. He has to ride it, but also respond to international pressure to de-escalate.” She added, “It’s a tightrope walk, no?”

Mr. Modi has been on that tightrope since late September, when India announced, for the first time, that it had carried out retaliatory attacks on terrorist bases in Pakistani-controlled Kashmir. Pakistan denied that Indian troops penetrated its defenses and said it would not respond, leaving open the possibility that the conflict would not escalate.

But the announcement took on a life of its own in India, where hunger for retribution has been building since Pakistan-based militants attacked Mumbai in 2008. A roar of public approval has been amplified by a supportive news media, with prominent figures goading the government to release footage of the attacks.

Mr. Modi last week sought to contain the triumphalism, ordering leaders of his party to avoid “chest thumping” over the strikes, Indian newspapers reported. He has not yet spoken of them publicly.

In his speech on Tuesday, he cautiously avoided any direct reference to Pakistan or the strikes, saying only that “those who give shelter to terrorism can no longer be spared.” Home Minister Rajnath Singh came closer in his introduction of the prime minister, describing him as a man who “has proved to the world that India is not weak.”

Mr. Sharma was effusive about the day’s symbolism. He had made posters celebrating Mr. Modi and Mr. Singh, in Bollywood style as “Avengers of Uri,” a reference to a militant raid that killed 19 Indian soldiers last month, which was presented as the trigger for the cross-border strikes.

“That act filled us with a lot of hope and renewed vigor for our country,” Mr. Sharma said.

It is unusual for counterterrorism operations to be used so openly to promote the fortunes of a political party or leader, said Shekhar Gupta, a prominent journalist and talk show host. He added that sustained public celebration of the operation risked provoking Pakistan, and locking India into a cycle of escalation.

“It would have been better now to move on with business as usual,” Mr. Gupta said. Instead, he said, “more and more Pakistanis of this generation are getting to know of this festival called Dussehra. And that there is a demon with 10 heads, and that two of the heads are Nawaz Sharif and Raheel Sharif.”

But Suresh Bindal, the president of the East Delhi Ramlila Association, said the public had spoken: When preparing the demon effigy this year, he had allowed his neighbors to choose between Pakistan, the “rapist mentality,” and chikungunya, a debilitating viral infection. Their choice was overwhelming.

“We took a photo of Mr. Sharif straight from the internet and pasted it on the effigy’s face,” Mr. Bindal said. “So it’s him. By blood, nature and society, all Indians are nationalists.”