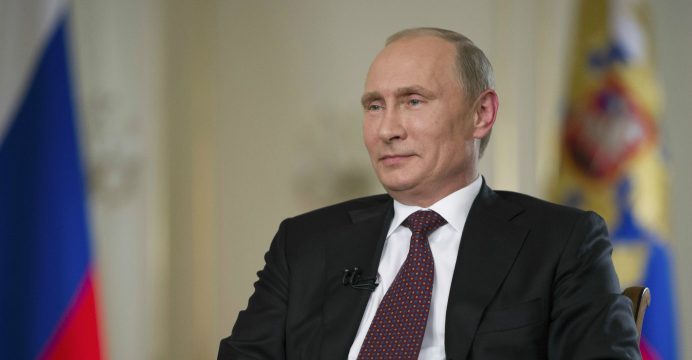 Vladimir Putin canceled trip to Paris amid rift over Syria

Russian President Vladimir Putin has canceled his trip to Paris scheduled for next week after French President Francois Hollande said he would see him only for talks on achieving peace in Syria’s increasingly bloody five-year war.

“The president made the decision to cancel his visit,” Kremlin spokesman Dmitry Peskov said on Tuesday.

“The president noted that he is ready to visit Paris at a time convenient for Hollande. We will wait for this convenient time to come.”

Putin’s cancellation is the latest deterioration in ties between Moscow and the West after Russia vetoed a French-drafted United Nations Security Council resolution on Syria, reports Aljazeera.

Growing anger over the Russia-backed onslaught on rebel-held areas of Aleppo had led Paris to reconsider whether to host Putin on October 19.

Putin was expected to meet Hollande and German Chancellor Angela Merkel in separate talks on the Syria crisis, particularly the city of Aleppo where government air strikes backed by Russian jets have pummeled rebel-held areas in the east.

“This is a very clear indication from the Russians that if the French want to talk about a ceasefire resolution, they have to sit down and negotiate with the Russians and do it on an equal basis,” Rami Khoury, senior fellow at the American University of Beirut, told Al Jazeera.

“Hollande talked about the International Criminal Court, the ICC, holding people accountable for war crimes, and he’s talking of course about Russia and the Syrian government…. The Russian president isn’t going to walk into a meeting with Hollande after Hollande said we’re going to think of sending you to the ICC.”

Nearly 300 people have been killed in air strikes on residential neighbourhoods since September 22, when a joint US-Russian ceasefire collapsed last month.

The French president in a statement said he was ready to meet Putin at any moment if there was a possibility to make progress for peace in Syria. Hollande said dialogue with Russia remained indispensable despite major differences on Syria.

On Monday, the French foreign minister said his country would push for war crimes investigations in besieged Aleppo.

“We do not agree with what Russia is doing, bombarding Aleppo. France is committed as never before to saving the population of Aleppo,” Jean-Marc Ayrault told France’s Inter radio.

Air strikes on Tuesday killed at least eight civilians in Aleppo’s Bustan al-Qasr and Fardos neighbourhoods, in the heaviest Russian bombardment in days on the city’s rebel-held sector.

“This is the heaviest Russian bombardment since the Syrian regime announced it would reduce the bombardment” on October 5, the observatory’s chief Rami Abdelrahman told AFP news agency.

The Syrian army said last week’s reduction in air raids on the eastern, rebel-held areas of the city was partly to allow civilians to leave opposition-held eastern neighbourhoods.

The Syrian government said rebels in Aleppo could leave with their families if they lay down their arms – an offer rejected by rebels.

Elsewhere in the war-torn country, pro-government forces attempted to erase rebel gains in Hama province further south, where opposition forces have captured a series of towns and villages in the past month.

In the southern city of Deraa, which is split between government and rebel control, rebel shelling of a school killed at least five people including children on Tuesday, the Syrian Observatory and state media reported.

Residents reported the same death toll. A separate mortar attack hit a government complex in the heart of the city with reports of casualties, a Deraa resident said, adding mosques were appealing for blood donations.