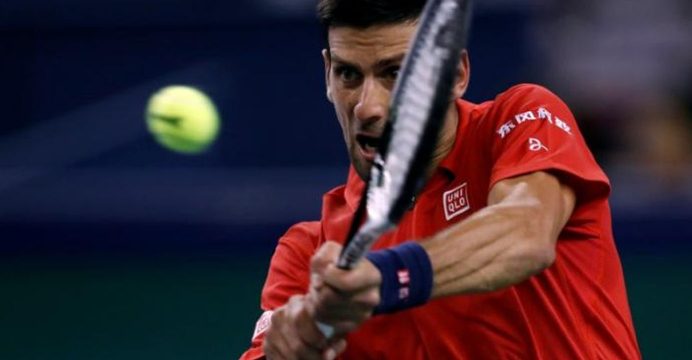 Djokovic storms through in Shanghai

World number one Novak Djokovic cruised into the Shanghai Masters third round with a 6-3 6-3 win over Italy’s Fabio Fognini on Tuesday, the Serbian’s first match since his loss to Stan Wawrinka in last month’s U.S. Open final.

The defending champion, who withdrew from last week’s China Open with an elbow problem, showed little sign of injury against his unseeded opponent, winning 83 percent of his first serve points in a match that lasted an hour and 15 minutes.

Djokovic started strongly, opening up a 3-0 lead to take control of the first set, but displayed signs of rust with 18 unforced errors.

He suffered a minor blip when he was broken in the first game of the second set, but held his nerve and hit back with two successive breaks to seal the win, helped by his opponent making 40 unforced errors.

The German, who is the youngest player in the world’s top 50, battled back to see off the vastly more experienced Cilic 3-6 6-3 6-2 in the day’s final match.

Australian Nick Kyrgios, ranked 14th in the world, brushed off the challenge of American Sam Querrey 6-4 6-4 in under an hour, firing down 14 aces and not facing a break point.