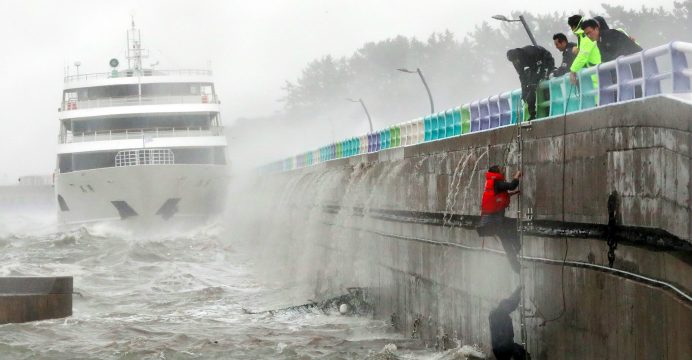 The violent storm passed over the southern tip of the Korean peninsula on Wednesday, pummelling the port of Busan — the country’s second-largest city — and the industrial city of Ulsan, reports BSS.

In Ulsan, a man drowned near his apartment and a woman was found dead at a flooded underground parking lot. More than 230,000 homes across the coastal area suffered power outages, but the Korea Electric Power Corp. said supplies had been restored by Thursday morning. 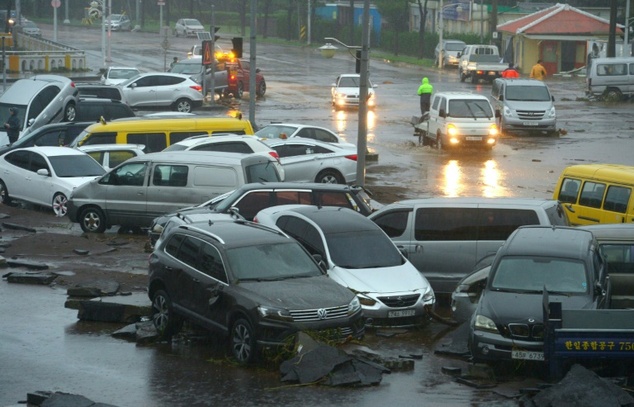 Cars damaged by flood water caused by Typhoon Chaba are seen along a street in the southern island of Jeju on October 5, 2016

In Ulsan, home to Hyundai Motor’s main production facilities, two car plants had to be closed down when the typhoon hit, and one remained offline Thursday due to flood damage.

“We are trying our best to resume operations as soon as possible, but we need more time to ensure safety in the assembly lines,” a company spokeswoman said.

Other footage posted on social media showed waves shattering the glass windows of seafront stores and a wooden house having its roof sheared off after slipping into a swollen river and being carried under a low bridge.

Festival events planned on Busan’s main Haeundae beach had to be cancelled or moved indoors after the strong winds blew away or damaged the temporary venues erected on the sand.

The typhoon had triggered severe storm warnings in Japan, but was downgraded to a tropical cyclone over the Sea of Japan (East Sea) before it hit Honshu island on Wednesday evening.