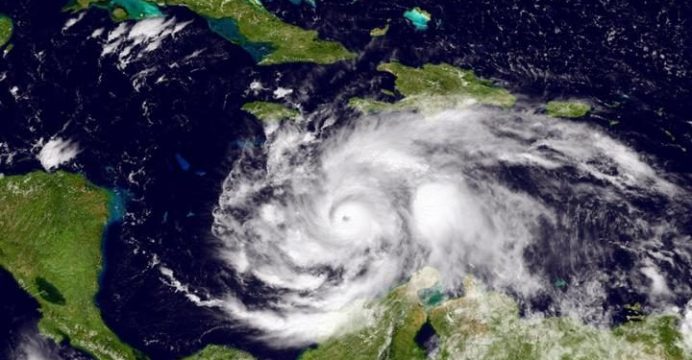 People of Cuba to prepare for Hurricane Matthew’s fury

Deserted roads and unlit street lamps felt anything but normal, however, shortly before the storm made landfall on late Tuesday afternoon, reports BSS.

Roberto Gates was one of the few residents in the city of Guantanamo — population 201,000 — who dared venture outside as a drizzle cooled what would have been a sweltering October day.

“I have food for today and tomorrow, and then we’ll see,” the 63-year old said on his way to buy rum.

Heading north at a speed of 17 kilometers (10 miles) per hour, the hurricane was “extremely dangerous,” with top winds of 220 kilometers) after hitting eastern Cuba around 2200 GMT, the Cuban weather service said. It is set to move past the island during the night

The authorities reported significant flooding and waves up to five meters (16 feet) in coastal villages in the east — but no casualties so far.

Cuba’s internationally recognized prevention and alert system is being tested again after the island was seriously battered by Hurricane Sandy four years ago. Eleven people died, some inside collapsed houses. Local media and many officials have spent the past 48 hours tracking the hurricane’s progress.

“The Cubans have shown an exemplary level of preparation,” said Jerome Faure, director for Cuba Oxfam, one of the few international NGOs here.
“It’s enough to look at the number of lives saved during previous storms” compared to other countries in the region.

With top winds exceeding 220 kilometers an hour, Matthew is a Category Four storm on the five-point Saffir-Simpson scale. Sandy was classified as Category Three when it crossed the island.

Guantanamo residents were urged to protect their windows with adhesive tape and cardboard, block their doors with iron rods and reinforce tin roofs with sandbags.

Alexis Vigo, an unemployed 45-year-old who lives with his mother, Barbara, in a colonial-style house built in 1968, said he felt “safe.”

“But if it things go wrong,” he added, “we can evacuate.”

His mother, 73, was more anxious. She planned to swallow a pill to calm her nerves and “light a candle and pray when the wind blows.”

Matthew is the 12th major hurricane to hit Cuba since early 2000. In 2005, Dennis — Category Three and Four — killed 16 people on the island. Matthew is expected to remain over Cuba through daybreak Wednesday.