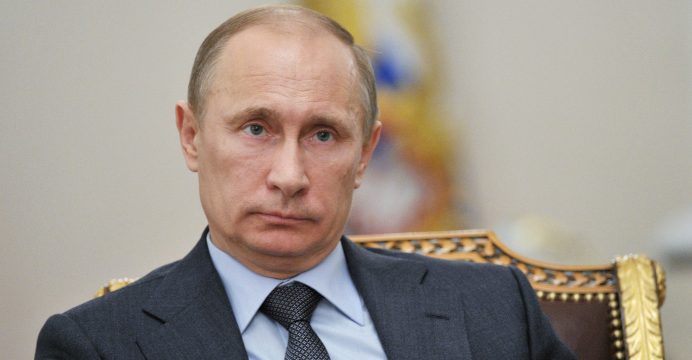 Russian President Vladimir Putin on Monday suspended an agreement with the United States for disposal of weapons-grade plutonium because of “unfriendly” acts by Washington, the Kremlin said.

A Kremlin spokesman said Putin had signed a decree suspending the 2010 agreement under which each side committed to destroying tonnes of weapons-grade material because Washington had not been implementing it and because of current tensions in relations, reports Reuters.

The two former Cold War adversaries are at loggerheads over a raft of issues including Ukraine, where Russia annexed Crimea in 2014 and supports pro-Moscow separatists and the conflict in Syria.

The deal, signed in 2000 but which did not come into force until 2010, was being suspended due to “the emergence of a threat to strategic stability and as a result of unfriendly actions by the United States of America towards the Russian Federation”, the preamble to the decree said.

It also said that Washington had failed “to ensure the implementation of its obligations to utilize surplus weapons-grade plutonium”.

The 2010 agreement, signed by Russian Foreign Minister Sergei Lavrov and then-U.S. Secretary of State Hillary Clinton, called on each side to dispose of 34 tonnes of plutonium by burning in nuclear reactors.

Clinton said at the time that that was enough material to make almost 17,000 nuclear weapons. Both sides then viewed the deal as a sign of increased cooperation between the two former adversaries toward a joint goal of nuclear non-proliferation.

“For quite a long time, Russia had been implementing it (the agreement) unilaterally,” Kremlin spokesman Dmitry Peskov told a conference call with journalists on Monday.

“Now, taking into account this tension (in relations) in general … the Russian side considers it impossible for the current state of things to last any longer.”

Ties between Moscow and Washington plunged to freezing point over Crimea and Russian support for separatists in eastern Ukraine after protests in Kiev toppled pro-Russian President Viktor Yanukovich. Washington led a campaign to impose Western economic sanctions on Russia for its role in the Ukraine crisis.

The rift has widened in recent weeks, with Moscow accusing Washington of not delivering on its promise to separate units of moderate Syrian opposition from “terrorists”. Huge cost overruns have also long been another threat to the project originally estimated at a total of $5.7 billion.