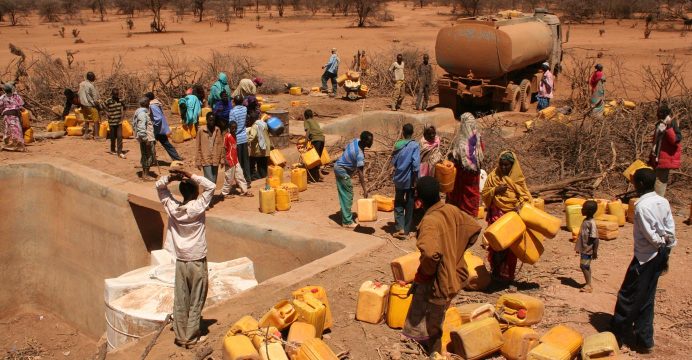 The United Nations World Food Programme (WFP) has provided food assistance to 10,000 people from Ethiopia and the Somaliland region of Somalia, displaced by drought to Djibouti, in addition to nearly 14,000 people in local communties – thanks to a contribution from the European Union and other donors.

From January 2016, thousands of pastoralists arrived in Djibouti from the Somali region of Ethiopia and from the Somaliland Region of Somalia, fleeing one of the most severe droughts of the last decade. Many pregnant women and children under five among the displaced showed signs of acute malnutrition and anemia. Half of the adult men and women were underweight and many were suffering chronic coughs, tuberculosis and diarrheal diseases.

In April 2016, the number of displaced pastoralists totalled 9,650 in different settlement sites in Ali-Sabieh, Dickhil and Obock regions of Djibouti. Their arrival put additional pressure on local people who were already affected by two decades of recurrent drought and overstretched social services.

Thanks to a contribution of €600,000 from the European Commission’s Humanitarian Aid and Civil Protection department (ECHO), WFP assisted the displaced pastoralists, most of whom were able to return to their area of origin by the end of May. WFP also provided much-needed support for nearly 14,000 people from the host communities.

“WFP is grateful for the EU’s strong commitment to invest in food and nutrition security among the most vulnerable people in Djibouti,” said WFP Country Director Jacques Higgins. “This crucial contribution from ECHO enabled us to meet the vital food needs of thousands of displaced people as well as those of local Djibouti communities, giving them both hope and strength.”

Throughout the project, WFP, together with Djibouti’s Ministry of Health, UNICEF and WHO, gave support to addressing cases of malnutrition, anemia and diarrheal diseases.
With the remaining ECHO funds, WFP maintained support to nearly 14,000 members of the host population in June and to 1,000 people in July and August.