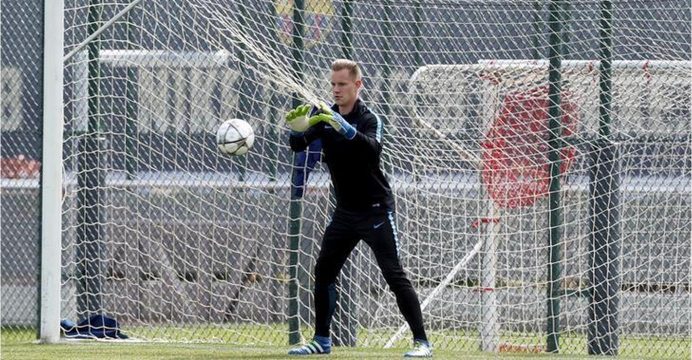 Barcelona’s biggest fear when Lionel Messi suffered a groin strain last month was how the team would cope in attack without the talismanic forward.

But while scoring goals has not been a problem for the La Liga champions who have found the net 11 times in the three games Messi has missed, defending certainly has been an issue.

“If I hadn’t made the mistake, we could have won this game,” Ter Stegen told reporters. “I’m sorry for the team, who fought really hard.”

With his side trailing, 3-2, Ter Stegen received a back pass from Jordi Alba and waited before attempting to kick the ball back to his team mate. Pablo Hernandez of Celta was just two metres away, though, and raised his right leg to block the pass, the ball deflecting into the goal to gift Celta a 4-2 lead.

“For me, it was the pass which seemed the right one,” Ter Stegen said. “It shouldn’t happen. It’s worse for the team; I think we lost because of it.

“It’s an error. I can’t think all the time about what’s happened. I have to continue, keep my head up. We continue on the same path, and so do I.”

As the Barca players go into the international break, though, they will have to digest a poor defensive effort overall.

Celta scored their opener after they intercepted an errant Ter Stegen pass that had been intended for Sergio Busquets and Pino Sisto finished from close range.

Jeremy Mathieu’s own goal then gave Celta a 3-1 lead.

Barcelona are fourth in the standings, two points adrift of leaders Atletico Madrid, who are level on points with Real but ahead on goal difference.

Luis Enrique’s side play at home to Deportivo La Coruna on Oct. 15 before hosting their former coach Pep Guardiola and Manchester City four days later in the Champions League.