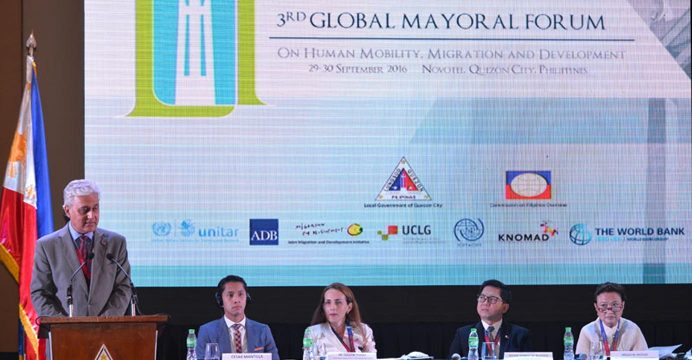 City leadership at front and center in implementing migration policy

The 3rd Global Mayoral Forum: “Governing Locally: City Leadership at the Front and Center in Implementing Migration Policy – Promoting Development and Securing Protection” is taking place in Quezon City in the Philippines.

The two-day event, which began yesterday and has attracted mayors and municipal representatives from over 60 countries, is addressing pressing challenges facing cities today, focusing on the role of diasporas in furthering development in communities of origin and destination; and the inclusion and protection of migrants and refugees in vulnerable situations within urban centres.

Addressing the plenary session on Thursday, IOM Chief of Staff Ovais Sarmad, representing Director General William Lacy Swing, noted that migrants form an important social and economic constituency not just in every country, but in almost every city of the world.

“Migrants the world over are valued as service providers, but they are much more than that: they are also creators, multipliers and transmitters of knowledge. They are valued for bringing a diversity of viewpoints and cultural enrichment to workplaces that design and produce goods for the global market. Finally, they are esteemed for their willingness to take risks (including obviously the risk of mobility) and for their entrepreneurial flair and ability,” he said.

“We must find a way to change the toxic migration narrative. Historically, migration has been overwhelmingly positive. Many countries have been built on the backs and with the brains of migrants. As city leaders, you can use your power of public pronouncement to accurately articulate the positive contribution of migrants in your communities,” he said.

“Many cities are facing major challenges in migrant integration. Integration will only be possible by promoting tolerant societies that value diversity and recognize what migrants bring. This is not to dismiss community concerns and apprehensions. You must be prepared to listen to those who are genuinely worried about social change and social diversity. On the other hand, you need to find thoughtful ways of explaining that, as Canadian Prime Minister Justin Trudeau succinctly puts it: diversity is a source of strength for the future, not of weakness,” he added.

The Forum comes ahead of the UN Habitat III conference in Quito, Ecuador, next month, which will address the challenge of “a new urban agenda.” It was hosted by Quezon City; supported by Switzerland; organized in partnership with UNITAR, JMDI, KNOMAD, ADB, Japan and IOM; and coordinated with the Commission of Filipinos Overseas.