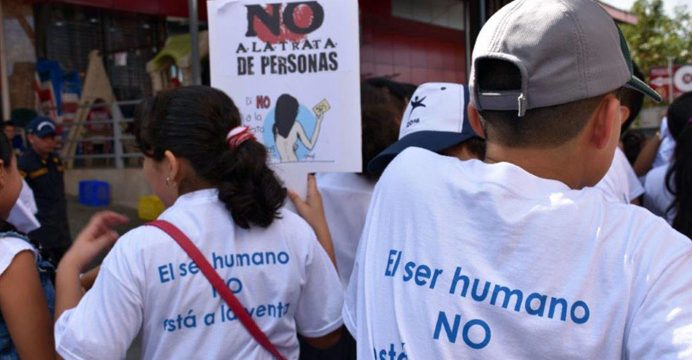 7,000 people got training to combat human trafficking in Mesoamerica

Students, government officials, non-governmental organizations and journalists are some of the nearly 7,000 people that in the last three years have participated in IOM’s training and awareness programmes, addressing prevention of human trafficking in the Mesoamerican region.

Through these training activities, participants have obtained tools that will allow them to identify risky situations, vulnerable populations, and how to care for and protect victims of human trafficking.

Most activities have been conducted through IOM’s Mesoamerica Regional Program, aimed at raising awareness of the protection of vulnerable migrants and discouraging high risk irregular migration.

Key activities include workshops, lectures, community festivals, and marches. This year, the Migration E-Learning Platform, a virtual learning tool developed by IOM, has also allowed basic instruction course on counter trafficking for 193 people and the creation of 30 new specialized tutors on counter trafficking.

Around the world, IOM is the largest service provider for trafficked victims. Since 1994, IOM has implemented programs dedicated to eradicating this crime and has provided direct assistance to more than 70,000 victims.

During 2015, IOM assisted more than 7,000 victims of human trafficking, of whom 45 percent were women and 13 percent children. Some 5 percent of these victims were identified in Central America. The Mesoamerica Program has assisted 12 victims in the last two years.

In the last two months, the Mesoamerica Program has developed a series of workshops in border communities of Mexico, Guatemala, El Salvador, Honduras, Costa Rica and Panama. Some 237 young people and teenagers participated, learning about trafficking and the important role they have in its prevention and detection.

In addition to this, some 2,050 people from the same countries attended community festivals called “InformArte en Movimiento” (Information on the Move) in which they could access information to prevent and identify human trafficking.

Yuliana Santos, a high school student at El Progreso, a small Panamanian community just a few hundred meters away from the border with Costa Rica, is now aware of the importance of the training, especially for those in the border communities where there is a large number of criminal organizations involved in trafficking. “My schoolmates and I believe the information we received today must be shared with other people here at the college and through social media,” Yuliana said.

In addition to the training, IOM also supports social mobilization projects such as the recent March Against Human Trafficking, which took place on the border between Panama and Costa Rica on 23 September. Some 300 people attended the march, including people from border communities, students, government representatives from both countries, international institutions and other organizations.

Alexandra Bonnie, the regional coordinator for the Mesoamerica Program, said that through various activities, the program contributes crucially to the global perspective of human trafficking that IOM shares. “The program’s various actions are governed by this global perspective and therefore have three core principles in common that characterize them: respect for human rights; wellbeing of the individual and his or her community, and support through the institutional strengthening of governments and civil society.”

The Mesoamerica Regional Program, which aims to strengthen government and communities capacity to assist and protect migrants in vulnerable situations, is funded by the US Department of State’s Bureau of Population, Refugees, and Migration. This program is closing its sixth phase and in October will start the seventh stage, which is not only expected to continue to provide support to partners through training, including on new subjects such as trafficking in crisis situations, but also the update or development of protocols and online course for judges and prosecutors on prosecuting this crime.