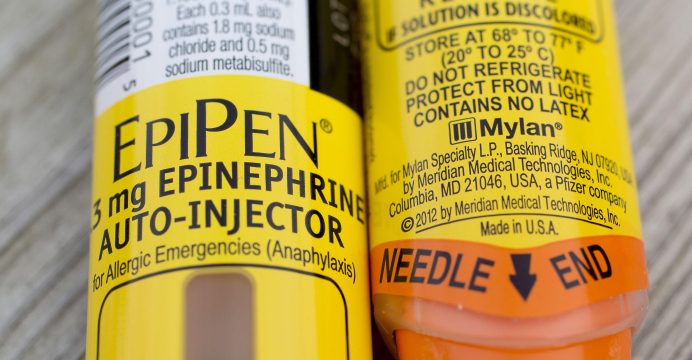 When Mylan NV recruited food allergy bloggers to learn about its campaign to get allergic shock antidotes into schools, many were eager to join the maker of the EpiPens they carry in purses and stash in book bags to protect their children against potentially lethal attacks.

The bloggers, more than a dozen mothers of children with serious allergies, embraced the effort Mylan outlined in a series of “summits” it held for them beginning in 2013, reports Reuters.

They wrote impassioned posts on blogs shared with tens of thousands of followers on social media. Their personal testimony helped persuade a number of state lawmakers to pass bills to get schools to stock epinephrine injectors, such as the EpiPen, according to legislators and others familiar with the lobbying effort.

During the same period, the company was marking up its EpiPen to more than $600 per twin pack, six times the 2007 price, creating a burden for many of the bloggers’ followers, other parents of children whose lives are threatened by bee stings and peanuts.

At least four of the bloggers told Reuters they believe Mylan took advantage of their goodwill. Some have joined public criticism of those price hikes.

“I personally believe that Mylan held the summits to gain blogger trust and then used those bloggers to spread word about their initiatives. They raised prices while those initiatives gained traction,” Ruth LovettSmith, a former food-allergy blogger from Massachusetts who attended three summits, said in an email.

Mylan spokeswoman Lauren Kashtan declined to comment on the criticism.

But in an email, she said the company regretted that it had not anticipated “the potential financial issues for the growing minority of patients” whose EpiPens are not covered by insurance or a patient assistance program.

Mylan now offers coupons to more families to cover out-of-pocket costs and said it would soon release a half-price EpiPen.

“Mylan aimed to provide access to information, resources and expertise about anaphylaxis and life-threatening allergies,” said Kashtan, who represented the company at four summits. “We are proud to have brought together such a passionate and dedicated group of advocates.”

Chief executive Heather Bresch was blasted Wednesday at a hearing before U.S. lawmakers who, along with prosecutors in several states, are investigating the price hikes.

EpiPen sales exceed $1 billion a year and command more than 90 percent of the market.