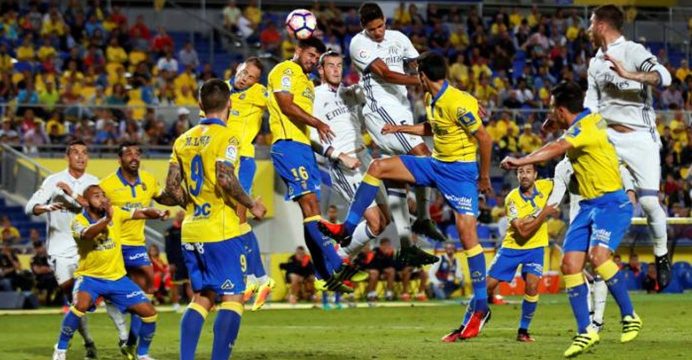 Substitute Sergio Araujo struck a late equaliser as Las Palmas held Real Madrid to a 2-2 draw and left them with a one-point lead over Barcelona at the top of La Liga on Saturday.

Karim Benzema had given Real a 2-1 lead in the 67th, three minutes after coming on, but the hosts spoiled the visitors’ night with Araujo’s 85th minute goal, reports Reuters.

Barca, playing without the injured Lionel Messi for the first time this season, won 5-0 at 10-man Sporting Gijon earlier in the day. Neymar scored twice while Luis Suarez, Arda Turan and Rafinha also hit the back of the net. 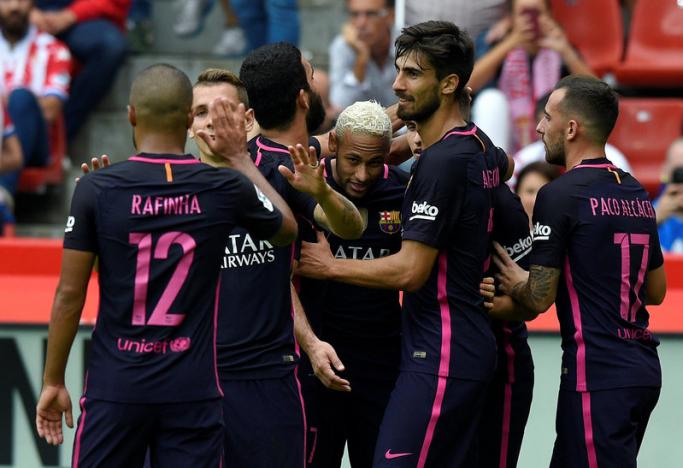 “I’m disappointed with the two goals we gave away,” Real Madrid coach Zinedine Zidane said. “We had the game under control but we had a lack of concentration at the end. We deserved to win this game.”

Marco Asensio headed in the rebound after goalkeeper Javi Varas was unable to hold onto Nacho’s powerful strike.

The hosts equalised five minutes later when Raphael Varane’s poor clearance from Momo’s cross fell to Tana and the Spanish forward slotted the ball in from 10 metres.

Benzema replaced Asensio in the 64th minute and the Frenchman scored after Cristiano Ronaldo’s powerful shot was kept out by Varas.

Zidane took Ronaldo off after 71 minutes with the Portugal captain, who had failed to score on Wednesday, having endured another disappointing performance.

“He always wants to be on the pitch but we have a game on Tuesday and I felt he needed to rest,” Zidane said referring to their Champions league match at Borussia Dortmund.

Marko Livaja nodded the ball into the path of Araujo, whose first shot was saved by Kiko Casilla but he reacted quickly and scored on the rebound.

Real are top with 14 points while Barcelona climbed into second place after Sevilla lost for the first time this season, 3-1 at Athletic Bilbao, and fell to fourth.

Barca made a slow start at El Molinon before Suarez broke the deadlock in the 29th minute, rounding Sporting goalkeeper Ivan Cuellar to tap in the opener.

Rafinha then headed in Sergi Roberto’s cross at the near post for the second three minutes later.

Sporting lost captain Alberto Lora to a second yellow card for a late challenge on Sergi Roberto in the 74th.

In the final nine minutes, substitute Paco Alcacer hit the crossbar but Neymar pounced on the rebound to tap in, Turan headed Barca’s fourth then Neymar got his second.

“The right-back position was new to me but I’m growing to like it more and more,” Sergi Roberto, who has switched from a midfield position, told reporters after laying on two of Barca’s goals.

Aritz Aduriz earned a late penalty after being elbowed by Sevilla goalkeeper Salvatore Sirigu, who was sent off, and converted for his team’s third.