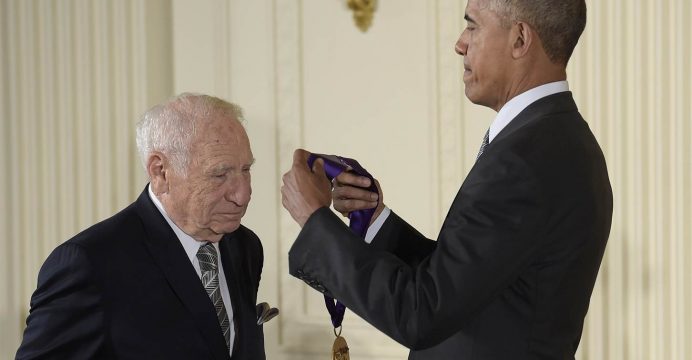 Barack Obama awarded 24 American giants of the arts and humanities with medals on Thursday, lauding their accomplishments – and sharing some laughs.

Comedian Mel Brooks, who Obama has said he admires for his over-the-top Western satire “Blazing Saddles,” looked as if were dropping down to receive a knighthood after a citation for “a lifetime of making the world laugh.” In fact, Brooks, 90, was miming that he was pulling down Obama’s pants, reports Reuters.

Obama laughed, shook Brooks’ hand, and warned that he would catch him if he tried to sell his National Medal of Arts on eBay.

“I do think Mel Brooks kind of set the tone for this thing,” Obama said afterward. “Historically, this has been a much more staid affair.”

“We believe that the arts and the humanities are in many ways reflective of our national soul. They’re central to who we are as Americans: dreamers and storytellers and innovators and visionaries,” Obama said.

“They’re what help us make sense of the past – the good and the bad – and how we chart a course for the future,” he said.

Obama gave a medal to Spanish celebrity chef Jose Andres, whose restaurants have been favorite haunts during his time in Washington, and who has worked with the White House on immigration reform issues.

Left unmentioned: Andres’ battle with Republican presidential candidate Donald Trump, who sued Andres for backing out of a deal to open a restaurant in his new Washington hotel after Trump made disparaging comments about Mexican immigrants.