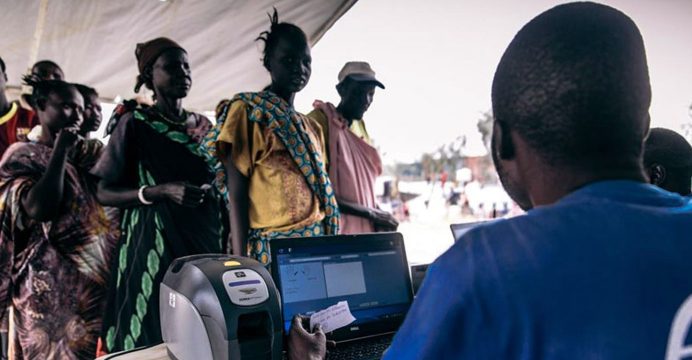 The registration, which will continue for three weeks, will improve response planning and IDP access to humanitarian services at the site, where approximately 39,400 people are seeking protection from the crisis that erupted in December 2013.

With support from UN Mission in South Sudan (UNMISS) peacekeeping troops and UN Police to secure the site, ACTED, IOM and UNHCR are working with staff from WFP, Concern, Handicap International, THESO and community representatives to roll out the exercise.

During the registration, each household member is fingerprinted and issued with an individual identification card. This methodology minimizes duplication, absentees and errors found in paper-based registration, enabling appropriate response planning and avoiding replication of services.

Extremely vulnerable IDPs are assisted by protection partners and fast-tracked to the front of the queue to reduce waiting time. All IDPs are covered by the biometric registration, including those who are unable to leave their shelters, under treatment at the clinic, or in the holding facility.

When fighting reignited in Juba in July 2016, thousands of new arrivals fled to the site and the UNMISS base in Juba’s Tongping neighbourhood for safety. Since August, more than 2,600 people have relocated from the Tongping base to UN House with support from camp management and UNMISS. An estimated 1,300 people remain at Tongping as relocations are ongoing.

“A number of families were separated during the conflict, with family members stranded in Tongping, unable to reach their shelters in UN House. The relocation has, therefore, often led to emotional reunifications and relief, when families are once again reunited in the safety of UN House,” said Victoria Parr, ACTED camp manager.

To accommodate new arrivals and mitigate the impact of overcrowding in the congested site, IOM has constructed more than 170 new shelters in the site. ACTED, as camp manager at UN House, has relocated over 500 people from communal to individual shelters to date. UNHCR monitors the relocation to ensure that families stay together and the most vulnerable are not left behind.

Approximately 200,000 people are sheltering at UNMISS bases across South Sudan, seeking protection from the ongoing crisis, while humanitarian conditions continue to worsen as the nearly three-year conflict persists.

ACTED, IOM and UNHCR co-lead the Camp Coordination and Camp Management (CCCM) Cluster in South Sudan and support the coordination of assistance within displacement sites throughout the country, where more than 1.61 million people remain internally displaced by the crisis.