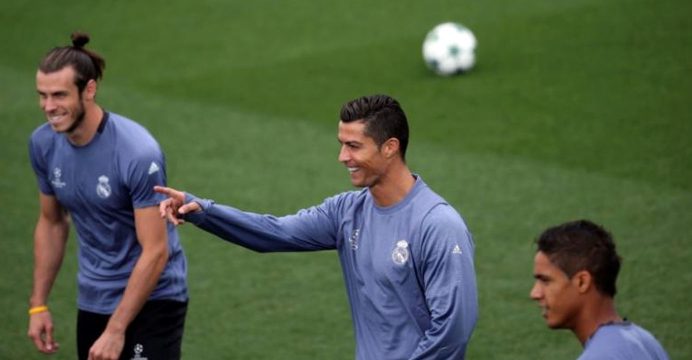 Ronaldo and Bale to make Real return against Villarreal

Ronaldo, Real’s all-time top scorer, missed Sunday’s 2-0 win at Espanyol with a sore throat while record signing Bale was out with a hip injury sustained in the Champions League win over Sporting Lisbon.

“They are both well, they trained normally and are both 100 percent,” Zidane told a news conference on Tuesday ahead of game with Villarreal, who are unbeaten this season having won two and drawn two of their four games.

The return of Bale and Ronaldo means Zidane will be able to start with his first choice front three – Bale, Ronaldo and Karim Benzema – for the first time in a league game this season.

Veteran defender Pepe, however, will miss out after finishing the Espanyol game injured and goalkeeper Keylor Navas has still not recovered from surgery on his Achilles.

Real are top of La Liga and are the only team in the top flight to have won all four of their opening games.

Despite equaling a La Liga record of 16 consecutive wins last Sunday in beating Espanyol, however, Zidane’s side have been criticized by Spanish media for their uninspiring performances.

The European champions needed an 89th-minute equalizer and a stoppage-time winner to beat Sporting last week in the Champions League, and had nervous moments against Espanyol before Benzema sealed the points.

Zidane, however, shrugged off the negative comments.

“Criticism is expected here, you know when you are a player or coach here that you will face greater demands than anywhere else, you know that when you sign for Real Madrid,” he said.

“You can always improve whether you’re a player or a coach but we are doing pretty well,” the Frenchman added.

“We’re going to try and improve our play and keep a clean sheet. But we know we’ll have a very difficult game at home, against a very good side who are unbeaten, so we’ll have to prepare for the game well.”