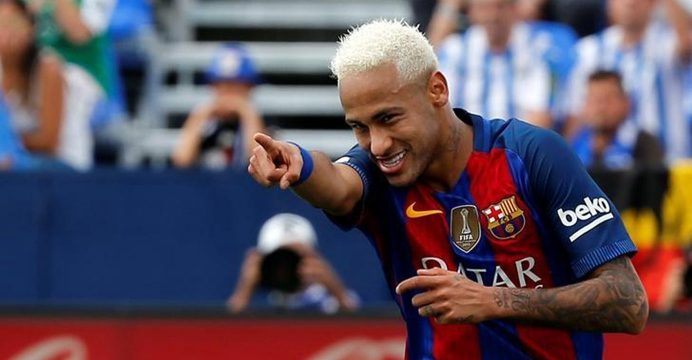 Former Barcelona great Michael Laudrup lambasted the Brazil international for “provoking” the opposition in Saturday’s 5-1 win at Leganes and Neymar’s flamboyant style will be scrutinised again on Wednesday when Barcelona host Atletico.

Commentating on Saturday’s game at Leganes for BeIN sports, Laudrup said he understood why Lluis Sastre kicked out at Neymar during the game.

“Why are you taking the ball across your own half? You’re provoking the opposition. When it’s 4-0 you can’t be showboating and provoking your opponents,” Laudrup said.

Neymar’s penchant for trying to embarrass opponents with flicks and tricks has prompted criticism in Spain before, with Luis Enrique once declaring he sympathised with Athletic Bilbao players for fouling Neymar in the 2015 King’s Cup final.

The coach, however, took his player’s side when questioned about Laudrup’s comments.

“He has his own style and I think it’s spectacular for football. We enjoy his play a lot at Barca,” Luis Enrique told a news conference on Tuesday.

“We know what world we live in and what people focus on, but I like his concept of football, and no-one in La Liga can be surprised by it now.

“Perhaps it’s better to criticise things that are against the rules, as there is nothing saying you cannot do spectacular tricks.”

Atletico coach Simeone also defended Neymar when asked if he would be bothered if Neymar attempted similar tricks against his side on Wednesday.

“He has a particular style of play, like everyone else, but I love it,” Simeone said on Tuesday.

“He has been criticised and they have exposed his private life. He has fun, he sings he dances and he destroys opponents. They can keep criticising him. He needs to respond on the pitch.”

Simeone added: “He’s extraordinary. He went to the Olympics and won gold, he has found his place at Barcelona to showcase his talent, he has just come back from holidays and he’s still playing just as well.

“He has a personality that allows him to do all that, and I love watching him.”