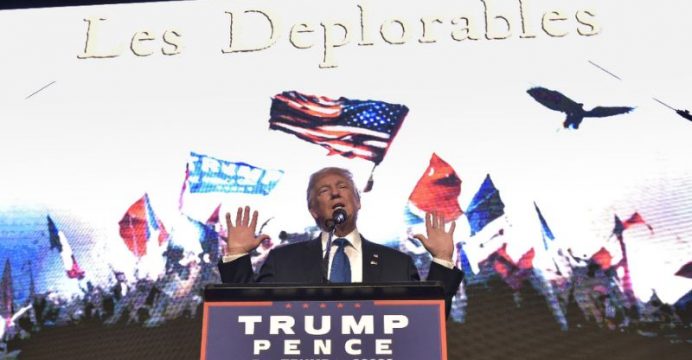 Republican presidential candidate Donald Trump raised the threat of violence against his Democratic rival Hillary Clinton again on Friday, suggesting her Secret Service guards voluntarily disarm and “see what happens to her.”

Members of Clinton’s government-appointed guard detail should abandon their weapons because she wants to “destroy your Second Amendment,” Trump said, referring to the US Constitution’s clause that enshrines the rights of Americans to bear arms, reports BSS.

“I think that her bodyguards should drop all weapons,” the real estate billionaire told a cheering rally in Miami. “I think they should disarm. Immediately.

Secret Service agents protect both Trump and Clinton as presidential nominees. Clinton campaign manager Robby Mook condemned Trump’s remarks, saying they “should be out of bounds for a presidential candidate.”

“Whether this is done to provoke protesters at a rally or casually or even as a joke, it is an unacceptable quality in anyone seeking the job of commander in chief,” he said in a statement.

“He is unfit to be President and it is time Republican leaders stand up to denounce this disturbing behavior in their nominee.”

Although Clinton favors some gun control measures, Trump has inaccurately suggested she wants to ban all guns. The Republican’s statements on Friday echoed comments he made at a rally last month when he suggested that “Second Amendment people” — gun owners or those backing gun rights — could stop Clinton from winning the White House and picking new US Supreme Court justices.

“If she gets to pick her judges, nothing you can do folks,” Trump said. “Although the Second Amendment people — maybe there is, I don’t know.”

“Crooked Hillary wants to get rid of all guns and yet she is surrounded by bodyguards who are fully armed,” he tweeted. “No more guns to protect Hillary!”

Trump’s latest comments follow another attack in Washington earlier in the day when he accused Clinton without evidence of starting the movement that questions President Barack Obama’s nationality and right to be president.

He had led the questions for years, admitting only on Friday that Obama is an American — and attempted to take the credit for ending the conspiracy theory — as he tried to neutralize damaging charges of racism.